The American Institute of Architects (AIA) has selected Minneapolis-based practice Snow Kreilich Architects as the winners of the 2018 AIA Architecture Firm Award. Working predominantly in the cold climate of the northern United States, the firm utilizes warm materials and light-filled interiors to create bold designs focused on transforming the human experience. 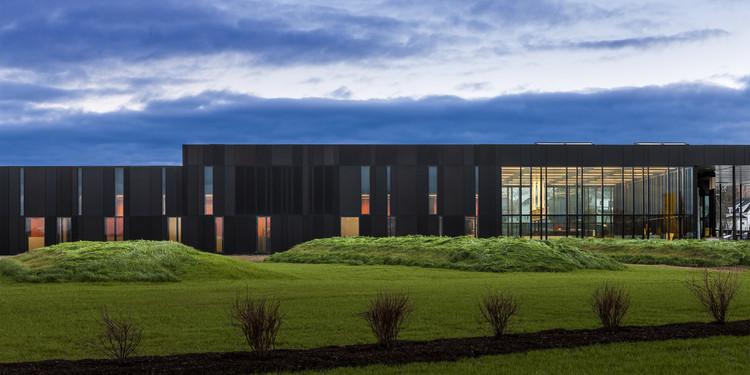 Founded by Julie Snow, FAIA, as Julie Snow Architects in 1995, the firm changed its name to Snow Kreilich Architects when Matt Kreilich, AIA, was promoted to partner in 2014. Since its inception, the firm has prioritized diversity among its staff. Today, more than 50 percent of its members are women and minorities, fostering a unique culture of collaborating perspectives.

In its 22 year history, the firm has completed projects in a wide range of scales, from a ballpark in downtown Minneapolis to a number of single family homes. While each project is approached in response to its own programmatic and contextual requirements, all are tied together by a unifying mission to elevate the experience of its users.

“Much of that is done by exercising restraint, eliminating indulgent flourishes in favor of straightforward forms that speak about material richness and tectonic refinement,” explain the AIA in their announcement.

Key projects completed by the firm include ports of entry for the U.S. Department of Customs and Border Protection in Maine and Minnesota (2010, 2013); the Brunsfield North Loop Apartment in Minneapolis (2014); and most recently, the Lofts at Mayo Park (2017).

“This is an architecture of use and convenience, permanence, and beauty, deeply rooted to its place, and constructed of materials choreographed in an emotive way, with poetic qualities that move us deeply,” wrote Marlon Blackwell, FAIA, in a letter supporting Snow Kreilich Architects’ nomination for the Architecture Firm Award. “Their body of work is distinguished by a restrained formal elegance and a refined minimal tectonic sensibility while avoiding the nostalgic and technological excesses of our discipline. Indeed, they see architecture as a material practice and a cultural act born of a sensual pragmatism.”

In addition to a commitment to promoting standard business hours and a healthy work/life balance, Snow Kreilich Architects has made community outreach and pro bono work a key initiative of the firm. In 2017, the firm provided $120,000 in pro bono services to outlets including the Kibera Girls Soccer Academy in Kenya and the Leatherback Trust in Costa Rica, while many studio employees play active roles in local architecture schools.

“What I find so admirable about Snow Kreilich is the clarity and resoluteness of their work, no matter the scale or level of complexity,” said Steve Dumez, FAIA, in his letter supporting the firm’s nomination. “Their architecture is imbued with integrity and economy—powerful and profound. This careful and collaborative pursuit of solutions that are once pragmatic, environmentally responsive, and context-driven exemplifies the studio’s singular approach and represents the highest aspirations of American architecture.”

Given annually, the AIA Architecture Firm Award is the highest honors bestowed by the AIA on an architecture firm. The award recognizes a practice that “consistently has produced distinguished architecture for at least 10 years.”