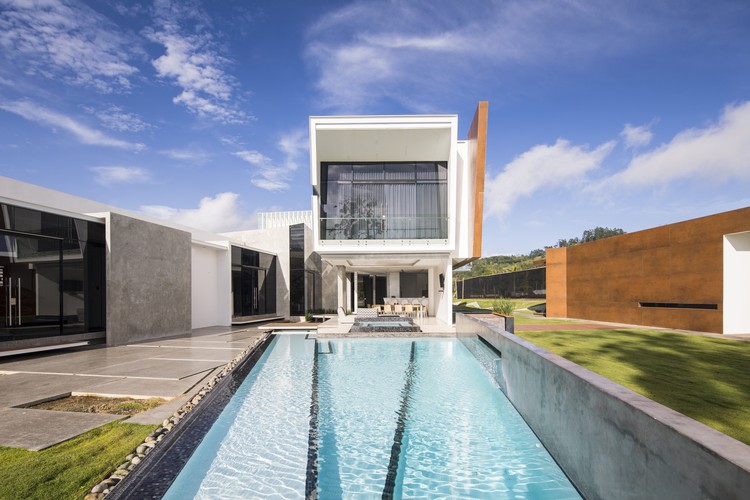 Text description provided by the architects. PMX-01 is a residence located in the northern area of Palmares, in the province of Alajuela, Costa Rica. The site is located at a high point away from the urban center, between the Inter-American Highway and San Isidro’s hills.

From the first visit to the site we see that it is a large flat surface and it is evident that it does not indicate any pre-established order for the project site. According to the programmatic needs of the client, everything starts with the creation of an articulation between the residence and a tennis court, a flow that begins to distort the order of the locus, but at the same time establishes connections. A fissure is generated in the terrain that breaks with the monotony and creates verticality in the plane, modifying the geometry of it and that begins to suggest the location and
the morphology of both programmatic spaces.

The composition of its floor plan has roots in the concept of the Venturi effect, reducing the section that articulates both programmatic volumes to increase the circulation of natural ventilation, especially in the social area attached to the swimming pool and workout area.

The first floor is divided into two volumes articulated by a stylized circulation axis, which attempts to control the movement of the geometry of two spaces that seem to want to escape from their location. This movement generates a large central space, which works in conjunction with the linear geometry of the volumes to create a first level that enjoys natural cross ventilation. The same axis establishes a programmatic division, separating the private spaces from those of a social nature within the architecture. As a result, a direct programmatic communication between the volumes appears.

The second level rises only on the subsequent volume, housing the bedrooms area of ​​the residence. This space takes advantage of its position by rising above the enclosed volume to take advantage of the view towards the whole town, allowing the residents to contemplate the hills and sunsets in the background. The curved facade protects bedrooms from the wind coming from the north that blows between the mountains and feeds the valley of Palmares.

Details that play with artificial light celebrate the geometry, exhibiting the residence as a jewel. The transparencies, the rhythms, the cutout patterns, the blur, the glimpse, elements manipulated by different materials, create a kind of architectural lantern in space.

Architecture also manipulates natural light within space. Elements that generate rhythms, movements and games of light throughout the day, and translucent materials that control the intensity of the same, appear to create different atmospheres and accentuate the geometry and warmth of the spaces.

The water that articulates the volumes plays with light and air to regulate the atmospheres of the adjacent spaces, filling the void with reflections and giving it life.

The social within the project takes on a leading role, so that its enclosures are removed and open to the central space. The lounge area, the swimming pool, the dining room and the main room are integrated to create a single extremely flexible space, which adapts to the required programmatic needs.