The Japanese/Belgian team of Sou Fujimoto Architects and AWAA has been selected as the winners of an international competition for the design of a new tower to be located at a significant crossroads in the outer Brussels municipality of Auderghem.

Led by developer Unibra and construction company Thomas & Piron, the competition asked architects to propose a new mixed-use urban development of between 25,000 and 50,000 square meters that would activate the the prominent triangular site at the corner of the Herrmann-Debroux viaduct and the Boulevard du Triomphe.

Early renderings for the project show a series of sloping residential highrises growing out of a mixed-use podium, including one taller tower and a longer building featuring a concave roof. The various structures appear to be connected at key points via lightweight terraces housing plantings.

Still in its conceptual phase, the developers are considering a multitude of program elements for the complex, including retail, a hotel, a gym, offices and a cinema.

The project would contribute to a larger regeneration effort in the neighborhood, which has included the Universalis Park residential community and the Chirec Delta Hospital, recently completed by Brussels-based Assar Architects.

We won the competition for Delta Tower in Brussels! / Sou Fujimoto + AWAA

Plans for Delta Tower, however, are certainly not yet set in stone, as the acting mayor of Auderghem Christophe Magdalijns has already spoken out against its construction, calling it “too big and too tall” and criticizing the lack of community involvement in the competition.

Further information about the project is yet to be revealed, but if the community is brought onboard, a director for Thomas & Piron believes Delta Tower could be completed in as little as 8 years. 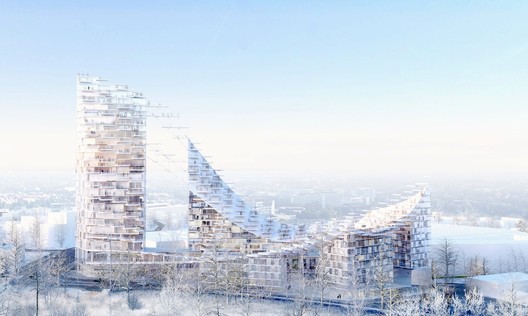