Over 100 individual lighting screens come together to form the Greek letter, "alpha," generating a spiral movement which extends from the interior to the exterior of the building. The screens utilize silk-screen printing technology and dichroic film to create an iridescent vortex creating a vibrating structure that breathes with the wind and the space, allowing itself to be transformed by both the daylight and the darkness.

The form initiates at the heart of the skyscraper, the interior greenhouse—here, the multiplicity of the screens acts like frames in a stop motion and their materiality spawns a wave of shimmering, lustrous colors in the multi-story space. This wave of dynamic light continues to the exterior where 1 kilometer of flexed fiberglass situated 35-stories high endlessly repeats the alpha symbol and feels as if it was floating on air.

The light installation in its entirety acts as an iridescent presence where transparency and lightness transform action, movement, and light. Although composed of numerous different elements, they all come together to form a single entity to evoke a pulsating organism within the built environment.

It’s like entering the shape of a tree or the deepest depths of a complex organism. It acts as a natural landscape, where shadow, light and atmospheric elements come inside and modify perception - Ico Migliore e Mara Servetto. 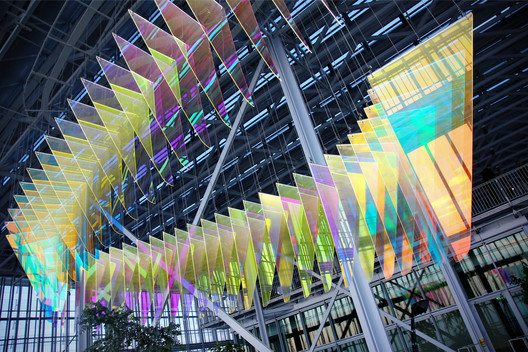