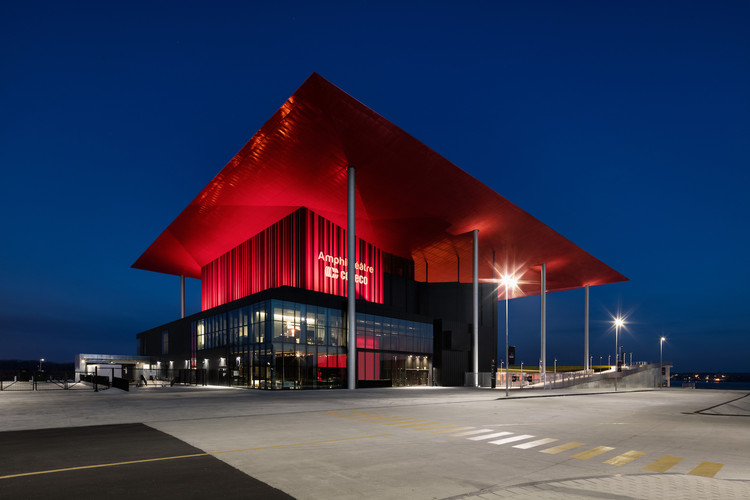 Text description provided by the architects. The project is the result of an open and anonymous architectural competition to design a new 10,000 seat outdoor summer amphitheater for the city of Trois-Rivières, Quebec. The competition challenged architects to propose a landmark design of an international scope, comparable to the Sydney Opera House fronting the water. After the closing of the Tripap paper mill in 2000 located on a site between the historic downtown and the waterfront, the City of Trois-Rivières cleared the abandoned industrial site to make way for a new urban redevelopment project called Trois-Rivières-sur-le-Saint-Laurent. The site, at the junction of the Saint-Lawrence and Saint-Maurice Rivers, was to give the population regained access to the waterfront. The quality of the location, in connection with the Harborfront Park, the downtown streets, the Saint-Lawrence River and Saint-Quentin Island, called for a grand gesture.

Several planned infrastructures (promenades, boardwalks, public spaces, cultural facilities) are to serve as an anchor at the crossroads of one of the most important waterways in North America and the Saint-Maurice River. The project’s centrepiece is a new outdoor 10,000 seat summer amphitheatre. The City demonstrated the will to make the redevelopment project an example of how a community can redeploy itself around a project combining living environment, working, leisure and culture. For the realization of the amphitheatre, the municipality chose to proceed by way of an architectural competition to obtain a building of international scope. The competition was seen by the City as a unique opportunity to select a quality building by challenging architects to submit innovative solutions.

It was also an opportunity to examine, with experts convened by jury, concrete architectural solutions that aim at making the future amphitheater a unifying project that will consolidate and mark the development of Trois-Rivières. The challenge was to create a landmark with an initial 34 M$ budget. In order to achieve this, the architectural part exploited a fundamental core element of the program: a roof that protects the public from the rain. Intended in the program as a low element, limited to the fixed seating area, it was raised at the level of the fly tower to embrace it and extended beyond its initial limits to form an 80 x 90-meter rectangle on the horizon. To make it appear as thin as possible, the sides taper to terminate with a bent 6.4 mm thick galvanized steel plate. At its central area, the roof is 6 meters thick, housing catwalks that give access to technical galleries for stage equipment and lighting. Located in an open site, the amphitheater has no single front façade.

Symmetry was used as a geometric strategy to address its context, in the principle of Palladio’s Villa Rotonda. Eight slender steel columns, 850 mm in diameter, 26 meters high, give the roof a stately while open appearance, with crossing views on the Saint-Maurice River through the auditorium. Red and black express its function. The fly tower, an expansive space facing des Draveurs Avenue leading to the amphitheater, is clad with aluminum vertical panel painted in three tones of red. The roof soffit, in the last minute decision, was painted a bright red. At night, it turns into a glowing inverted curtain, lit by recessed projectors at the base of the silver painted columns. The amphitheater is being used as a cultural summer venue operating from May to September. It has the capability to present high capacity live shows that attract large audiences as well as more intimate presentations like to local symphonic orchestra or the jazz festival. During the winter months, a monumental thermal door closes the stage opening. Interior spaces can thus host exhibits, public meetings and a winter programming for a capacity of 700. 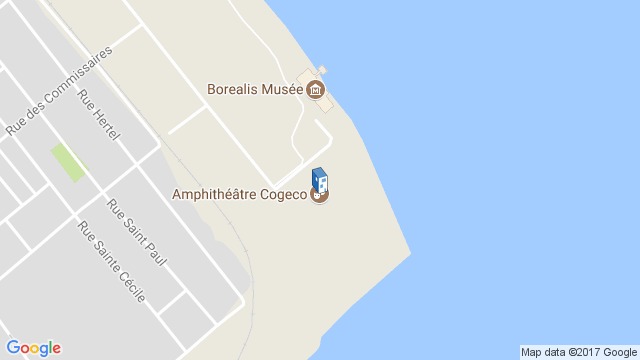