Aimed at exploring how architecture contributes to urban regeneration through both decorative and functional means, the I LOVE STREET was developed through a participatory process that asked students from Seosuk Elementary School to contribute drawings expressing their desires for the street. The end result was a graphic, sensory-stimulating design featuring zones in multitude of materials including grass, fountain, sand, wood, a trampoline and a giant chalk board. 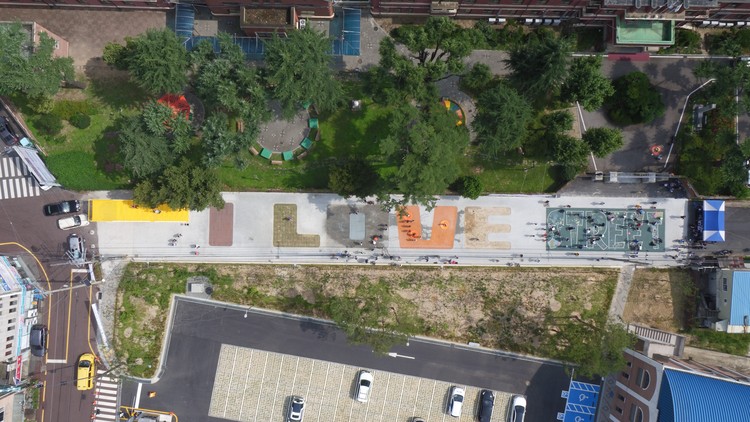 Known as a relatively industrial city, Gwangju suffers from a lack of pedestrianized zones, particularly in its historic core. The Gwangju Folly Festival was established in 2011 to reintroduce public spaces into the urban fabric, asking architects from around the globe to work with the community to create interventions that could enliven neglected parts of the city and transform them into more livable, human-scaled neighborhoods.

In creating I LOVE STREET, MVRDV analyzed previous years’ follies to see how their introduction has impacted the urban realm of Gwangju. Joining forces with the students and additional community members, the team determined that a automobile-free street activated with participatory program would benefit the largest number of people while also becoming an iconic symbol for the neighborhood.

Working with Gongjeong Construction co, the 960-square-meter (10,300-square-foot) street surface was covered in different materials and elements allowing for a maximum number of uses, including sitting, painting, jumping, climbing and playing. The surfaces were kept mainly flat, allowing the space to remain adaptable for larger events.  As a symbolic representation of the community’s closeness and celebration of public space, the different pavements were arranged to spell out the word LOVE.

“I LOVE Gwangju Folly can become so many things - I LOVE Korea, I LOVE Gwangju, I LOVE Walking or I LOVE Dancing,” commented Winy Maas, MVRDV co-founder. “The folly is a small intervention to make the city more sociable, fun and attractive, but more importantly, as a direct communication to further develop collective enthusiasm for more pedestrian spaces in Gwangju.’’

Now in its third edition, the Gwangju Folly Festival has sponsored more than 100 installations throughout the city by artists and architects including Peter Eisenmann, David Adjaye and Rem Koolhaas. Learn more about this year’s festival, here. 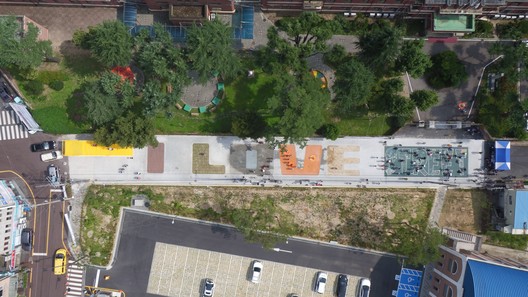