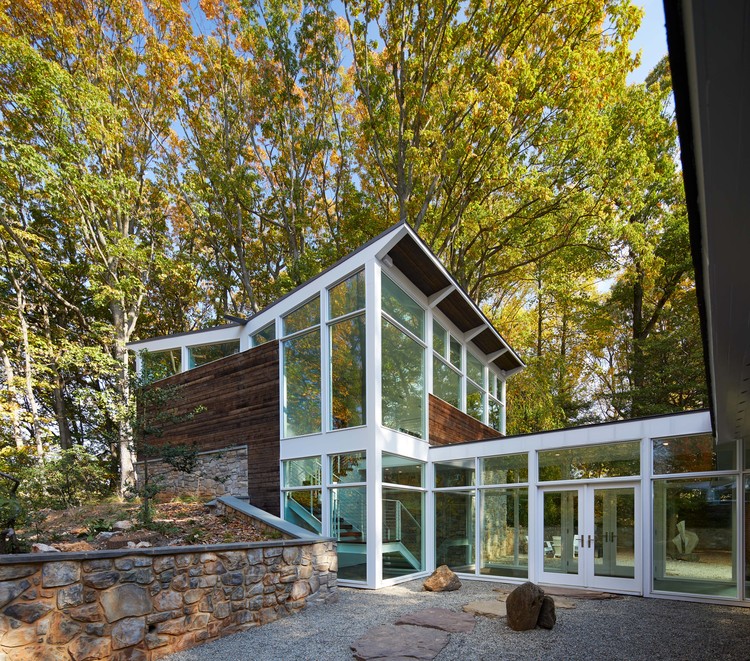 Text description provided by the architects. The mid-century modern home was less than two thousand square feet, yet beautifully sited on a densely wooded hill. The property provided an extraordinary amount of privacy and seclusion for a house less than four miles from the District of Columbia. Despite the very limited amount of space for a family of four, the clients purchased the property immediately. Five years later, with their two children rapidly approaching teenage years, the time had come to look at a house expansion. The clients wanted to maintain as many of the characteristics of the existing house and property as possible when they renovated to add living space. The mid-century modern ascetic, the simple volumes and details were all important. After all, these were the design features that first drew them to the house and property and they did not want to lose these design features in the renovation process.

Equally important was preserving views from the existing living spaces to the exterior. These views had become defining characteristics of why the property felt like home. Maintaining these characteristics was the syntax of the design solution. For the addition, two distinctly separate pavilion volumes were added. One pavilion provides a new master bedroom and a home office. It also affords new view sheds up the hill to the north and over the existing house to the south. The second pavilion provides another living space. Equipped with a custom built Murphy bed this pavilion can be closed off from the rest of the house with a sliding door and used as a guest room for visitors.

The new pavilions are clad in Shou Sugi Ban (Traditional Japanese Charred Cedar) siding that will gracefully patina amongst the surrounding trees. The siding on the existing house was removed and that volume also re-clad in the same Shou Sugi Ban siding. The placement of the pavilions was governed by sightlines and viewsheds. The new glass walkways connecting the pavilions touch the existing house as delicately as possible. The placement of the new pavilions also defines exterior spaces into outdoor rooms. The home has doubled in size but the ambience of the site is preserved.