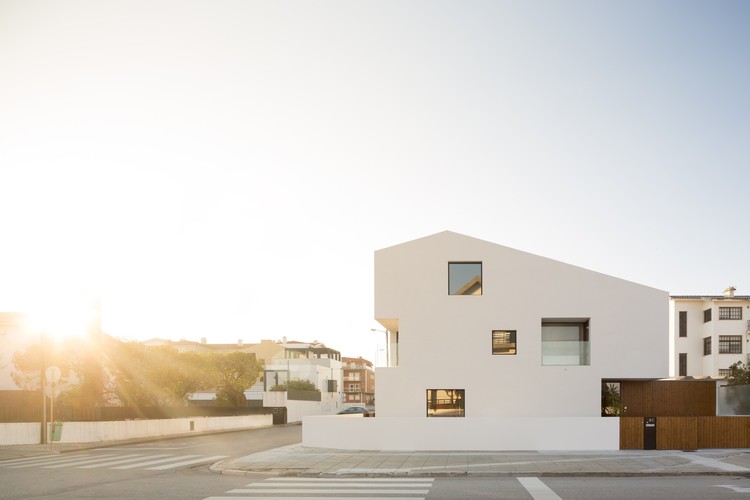 Text description provided by the architects. To build their two new houses on a family land, the "Fonte" brothers had to demolish the old beach house. That was for them the most difficult task of this project. The other? Make it look like one.Due to the small size of the plot, the implantation results from the alignment proposed by the municipality: facade of “Avenida da Bela Vista” away 3 meters from the fence; alignment for existing buildings in “Rua dos Faróis”; patio north and west with 3 meters. Thus the implantation was conditioned to a square with 12 meters.The volume is part of the idea of affirming a compact mass to which small parallelepipedic portions are subtracted to mark special events: entrances, porches and balconies. This is only contradicted by the opening of punctual windows, aligned by the inner face of the walls, and always squared.

The two-water roof saw its ridge round 45º, thus coinciding with the diagonal of the building's plan. This gesture responds to the formal need for characterization of the corner, while at the same time responding to the desire to dialogue with the surrounding. This made it possible to match the lower height of the construction volume with the existing west and north constructions with only one storey. On the other hand, it rises to affirm the definition of the street corner formed by “Rua dos Faróis” and “Avenida da Bela Vista”, pointing towards the collective housing building at the east.Because we were interested in the autonomization of both entrances, these are located in opposite corners: at “Rua dos Faróis” next to the extreme west and at “Avenida da Bela Vista” in the extreme north. In both cases the mass subtraction of the initial pure volume is clear, creating a small porch and masking the volume of the garage.

Although each entrance share car and pedestrian access, they are separated by a box that will receive all of the Infrastructures paraphernalia. The program is simple and is organized for each of the houses on three floors. On the entrance level the kitchen and the toilet are concealed in a volume lined with walnut and leaving the rest of the floor plant all free; on the raised floor, two small rooms, toilets and a suite. Under the roof, an informal space without a definite use. The entire building is lined with the ETIC system, painted in light beige. The design of the accesses will be marked in solid wood as well as the gates. The delimitation of the plot is executed with a small wall. The balcony guards are in transparent glass. The exterior floor is in concrete. Inside, the palette of materials will also be austere: again the concrete floor, walls and ceilings plastered for a tinned finish. 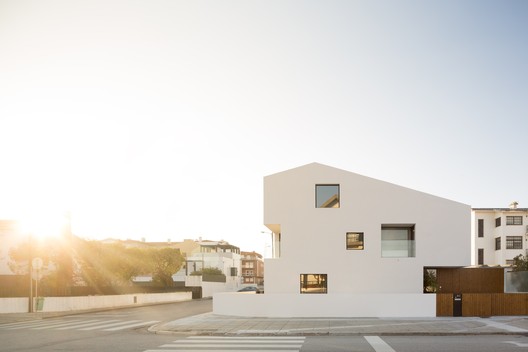