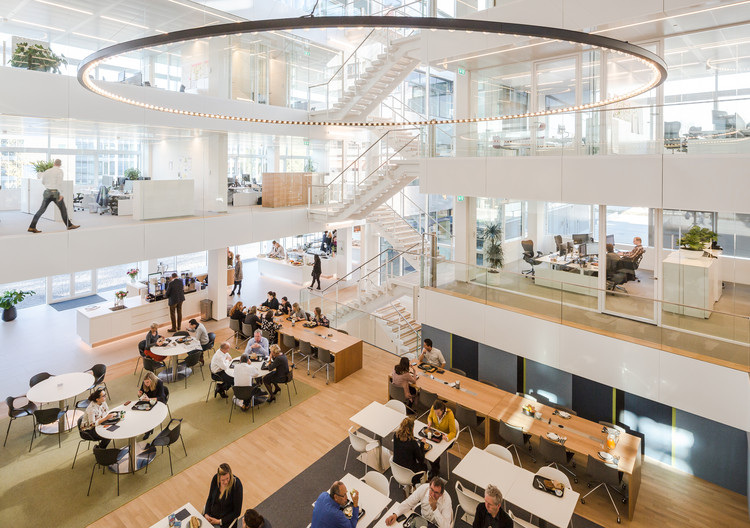 Text description provided by the architects. The original building, formerly named The Corpac House, stems from 1968 and was designed by the Rotterdam office Van den Broek & Bakema. In later years, this split-level edifice composed of two volumes at different height levels was expanded with several additions. In a variety of aspects such as climate, user experience and functionality, the complex no longer met contemporary standards though.

Cooperation
The motto for the renewed enterprise house was derived from the Roman historian Sallust (86-35 BC) and reads: Cooperation makes small things grow. Therefore, the transformation importantly focussed on enabling encounters and stimulating the sharing of visions and ideas. Also, the client the Van Spaendonck Groep wanted a building with a modern-day élan and truly sustainable in all respects. Current themes such as hospitality, representativeness, effectiveness, professionality, convenience, transparency, flexibility and an optimal support of the work processes all played an important role in this.

Effective Interventions
cepezed’s approach was based on efficient, effective and well-considered interventions. For instance, right at the project start, the office made a thorough inventory of the existing situation and the possibilities it included. For several construction segments, cepezed researched the cost-effectiveness of demolition and preservation. This showed that it was more profitable to preserve a particular addition that the client had actually nominated for demolition. It turned out that with minimal adjustments, the addition could easily blend in with the setup and aesthetics of the renewed enterprise house, thus rendering demolition a waste of resources. In the new situation, the segment houses several support functions such as the kitchen, storage, archives and mail room. Hence, these do not occupy valuable floor space in the original Van den Broek en Bakema section, leaving that fully available for letting offices with an agreeable experience and functionality. This importantly adds to an optimised return on investment.

Characteristic Façade
The renewed façade is based on the horizontal, very characteristic rhythm and articulation of the existing one, which was composed of strip windows with transoms and parapets of Triassic limestone. The new outer walls have the same proportion of closed and transparent elements as the old one, but with an outer finishing of aluminium and a minimalistic detailing, it has strikingly modern looks. Whereas the original façade included a difference in depth between the closed elements and the windows above them, in the new one these two are in the same vertical surface, thus adding to a smooth appearance. While in the original façade the glass sections of the windows and transoms were on the same surface, the transoms are now positioned a bit more inward. This brings about a difference in depth that is both intriguing and softening. Of course, the new skin guarantees high-grade construction physics, while the existing one was not even insulated in any way.

Transparent Inner World
The building’s inside world literally opened up. The original setup already had large spatial elements such as atria and voids, but by means of built-in cabinets, these were strictly separated from the workplaces around them. Thus, one could hardly experience the spatial wealth and abundance of these spaces. The separation also resulted in a very limited interaction between the different users of the building. cepezed broke open the existing, closed structure. The cabinets that once formed a barrier were removed and separations are now largely transparent.

The office floors were rearranged and fitted with a wide variety of workplaces, ranging from open and activity-based to concentration rooms and more traditional, cellular offices. The renewed layout came about in close consultation with the different tenants and was tailored to their needs and wishes. The new arrangement makes optimal use of the existing, clear and rational basic structure of the building. The fresh, light and airy atmosphere has long sightlines, stimulates the visual and user interaction between the different tenants and adds to a good orientation. A lot of attention was also paid to the functionality and ambience of the shared facilities such as the relax zones and the meeting rooms of different types and measurements.

All these fit the identity of the adjoining users and provide them with a distinctive own area within the whole. Whereas all zones specifically dedicated to working are neutral, sober and modest, accents in colours and materials lend an extra air to these larger, shared rooms. The designers conceived various custom furniture elements for them as well, again all in close consultation with the different tenants For use by all, the atrium adjoining the main entrance contains a working café with 98 seats. This is also where people have lunch and where events like receptions and celebrations take place. The chairs and tables here can be arranged according to any need of the moment, which adds to the multifunctionality of the area. A lot of attention was paid to agreeable acoustics.

Sustainability
The renewed enterprise house has a BREEAM Excellent certification based on the norms set for new constructions. A lot of elements of the existing building were preserved. The full main stability structure was reused and also interior elements such as the original stairwells and the stone cladding of the building’s core are a prominent part of the renewed edifice. Parts of the existing furniture were aesthetically upgraded and also reused. The use of materials was minimized, while the materials nonetheless used are high-grade and in line with the latest sustainability norms. A lot of them were applied in their natural appearance. The carpet tiles filter the air. The renewed façade is highly insulated and provided with HR++ glazing. The building’s detailing is minimalistic and attuned to minimal maintenance.

Just like the use of materials, the installations were minimized, while they are based on contemporary, energy-saving techniques. For instance, cooling and heating take place through climate ceilings, the temperature can be adjusted manually and individually, the building makes use of an underground thermal storage and most of the lighting is LED-lighting. The project also includes water saving measures and on the roof, the building holds some 200 m2 of solar panels. The parking is provided with a charging station for electric cars. The high degree of flexibility and the possibilities for different layouts of the renewed offices are an important part of the functional sustainability. Potential changes within the overall organization and future growth or reduction of tenant organizations are easily adjusted to. Also, for example, the installations are organized such that they fit different workplace concepts.

Changes can be brought about readily, with little effort and with relatively low costs. Around the building, a flowery biodiversity garden with a diversity of biotopes will be realized. This was designed by Green Curve, will be a valuable contribution to the urban ecology and will be pleasant for the building’s users to walk, work and meet in. For a nearby school, the garden will function as a learning location. The garden design aligns with the split-level setup of the building, while the building, in turn, counts no less than 31 doors leading outside. Thus, landscape and building interconnect in a natural manner. Part of the focus on connection and cooperation is the use of the building by third parties, who can rent rooms and facilities. This way, the Van Spaendonk Enterprise House also contributes to social and economic sustainability. 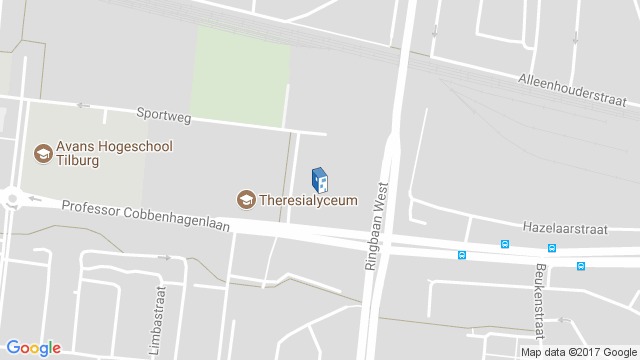