Text description provided by the architects. The project satisfies the requirement to construct a compact family hut, onto which a guest wing will be added.

The site, which is located meters from the lake within a dense Valdivian forest, proposes a compact volume positioned in the forest in relation to the lake.

The proposal is born from the idea of simple, compact construction together with the idea of the hut as a programmatic reference.

Under this guise the layout is separated into two large spaces. The house/hut makes up one area and a game-room / guest area the other. These, in turn are separated into shared uses on the first floor ground level and the bedrooms on the second floor, with a visual relation to the forest and lake.

The living/dining/kitchen space is set up as a pavilion in which the diagonal structure plays the role of establishing limits to the interior and exterior spaces, freeing the view along the lake, the rain and toward the canopy of green forest.

An X-shaped, structural component serves as a staircase where this common space connects with the second-floor bedrooms, which are arranged in a master bedroom and a second room with four bunks.

The second area is arranged with the bathroom and a game room, which are connected to the common space by way of a deck that serves as an intermediate space between both sections. Above this the guest area is located with an independent access by way of a second deck on the upper level of the house, which is also connected with both sections.

The materiality of the structure is of steel pylons and base, a wooden structure on the first level and enclosures of SIP panel and 50cm dimensioned glass to withstand gusts of wind.

For the finishings, dimensioned pine was used for structural elements, with olivillo wood for coverings. 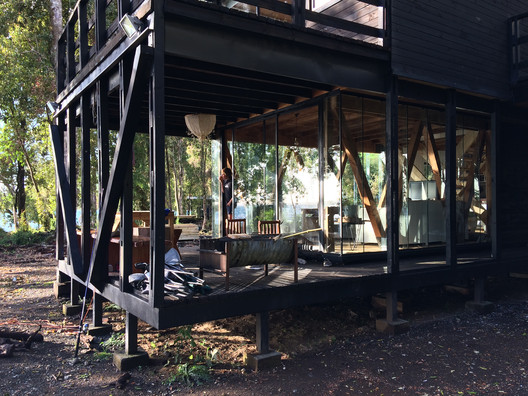