Bee Breeders have announced the winners of the Amber Road Trekking Cabins competition for the Latvian Baltic Coast. The competition sought proposals for low impact, transient and inhabitable infrastructure to support a planned hiking network along vast topographies of the Latvian Baltic Coast. The winning projects considered the various landscape elements of the site including pine trees, dunes, and white sand beaches while responding to programmatic requirements - economy, constructability, environmental sensitivity and utilitarian function.

The competition collectively provokes reflection of ecological conservation and its prescience in contemporary cultural and social practice, serving as an economic alternative to the commercialized, industrialized landscape definitive of global capital interests. 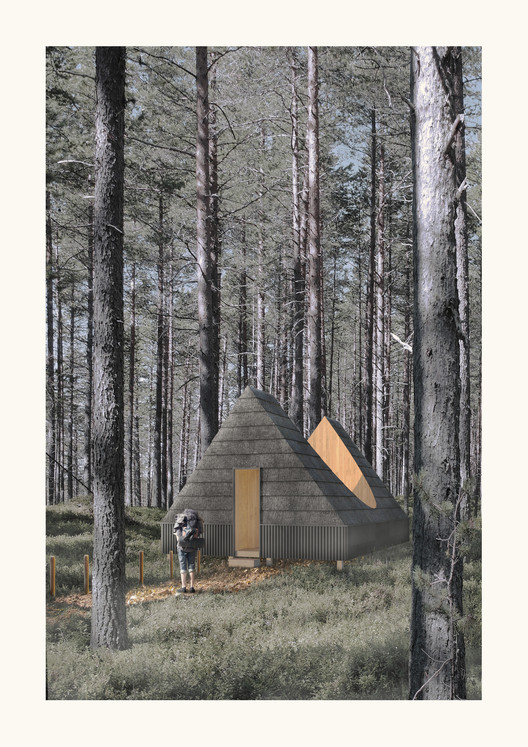 Link - A Sustainable Connection Between the Forest and the Ocean: Scott Grbavac, Andreea Cutieru and Santiago Carlos Peña Fiorda

A network of narrow passageways leading to cabins within the forest is the basis for the winning scheme - LINK, low impact architectural interventions that preserve the native ecologies of the sites. The cabins draw on Latvian vernacular architecture, mimicking the primitive hut typology but subverted by the interior spaces. Each hut operates as a voided exterior space - a hearth carved out of the middle of four interior rooms, providing the private space for each hiker. This iconic subversion of public and private, indoor and outdoor, was a driving motivation for the selection of LINK for first prize.

The winning project, LINK by Scott Grbavac, Andreea Cutieru, and Santiago Carlos Peña Fiorda from Denmark, was chosen for its strength as both an architectural and landscape proposal. By creating a network of narrow passages leading to the trekking cabins within the forest, LINK pursues an alternative mode of conservatism - creating low impact architectural interventions within the native ecologies of the site to preserve the natural landscape.

The second place proposal, Human Atrium, pinwheels sleeping quarters around a central shared space and generates small desks for contemplation of the landscape. The rotating system also generates outdoor benches and storage spaces, maximising the potential of this efficient cabin. Painted red and referencing the Latvian vernacular and pastoral agricultural structures, the cabin would be a subtle and seamless addition to the hiking trail.

The success of the second place proposal lies in its ability to simultaneously delineate the privacy of the individual and promote a collective ethos within a very compact footprint.

The third prize proposal, Amber Road Trekking Cabin is a small double-story cabin elevated above the forest floor. A fully openable ground floor begins to blur the threshold between inside and outside, opening the shared space to the surrounds. The upper floor sleeping quarters would be clad in a translucent material, acting as a beacon along the hiking trail.

The strength of the third place project manifests in it’s ambition to develop an infrastructural landscape typology, comparable to the windmill, grain silo, or lighthouse, as an icon of the Latvian coast. Constructed at the edge of the forest or along the waterfront, the trekking cabin takes advantage of the predominantly horizontal datum of the landscape and its affiliation with the distant horizon creating a vertical marker for travelers passing by.

The full selection of all winners, honorable mentions, and shortlisted entries can be found here.