Bee Breeders have selected the winners for the Pape Bird Observation Tower competition, which saw participants submitting designs for a new bird observation station located in the Nica and Rucava Municipalities in the South Western region of Latvia. The competition is the first in a series organized by Bee Breeders in collaboration with Pasaules Dabas Fonds, Latvia's leading nature conservation fund. The competition asked for proposals for a tower that would replace a previous tower that was struck by lightening. 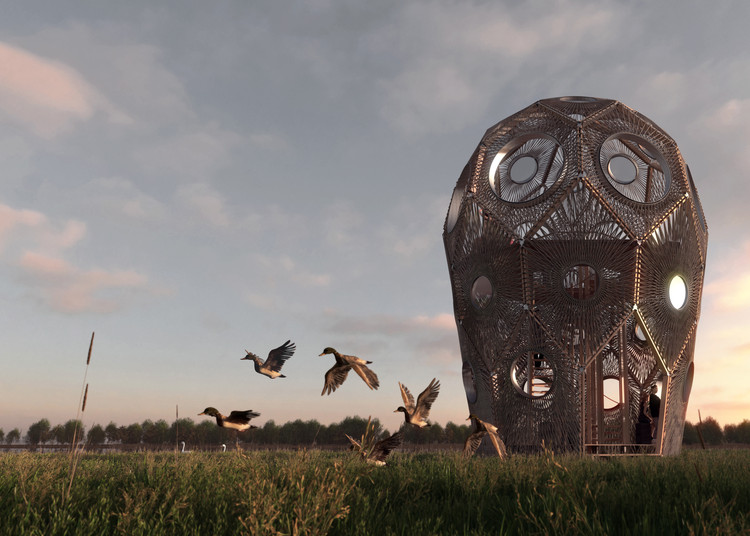 The winning schemes were selected based on their environmental sensitivity to the unique and varied parklands surrounding the scheme, their functionality, and their potential to become a landmark. The tower will be used primarily to record annual migratory habits of birds, but will also allow visitors to the park the opportunity to engage with the park and its resources.

The winning scheme wraps rope around a timber structure to create a woven enclosure with varied porosity and light effects. The project aims to blur the boundaries between the observer within built space and the landscape itself, generating a unique and dynamic experience. The judges were particularly impressed by the structural system of timber and rope, believing it to be achievable, adaptable, sustainable and economical. Being one of the more daring entries of the competition, it's no wonder this unique project stood out as a winner.

The form of this entry is simultaneously reminiscent of a bird's nest and a jewel box - both of which bring to mind delicacy and intricacy, yet also protection.

The second prize winner - Pape Bird Observation Tower, employs simplicity and rigidity to offer a stark contrast to the surrounding landscape, decidedly standing apart. The charred timber exterior stands as a testament to the events that saw the destruction of the previous tower. Despite its solid form, the tower rests lightly within the marshland, and the austerity of the design and its representation reflects its intention to function without impedance on the existing environment.

An important factor of parkland conservation is the necessity to share with visitors the wonders of nature, so that society, too, feels the need to protect its fragile and priceless resources. This project shows great potential to promote such interaction. With eye-level panoramic views and built-in seating, the submission invites lengthy and comfortable visits, camouflaging users so as not to alarm flying birds or wandering animals on the ground.

The third prize submission places two rectangular walls parallel to each other, the metal grating system designed so the tower dematerializes as you move around it. This was considered beneficial for both the visitors, who at points would experience a clear view of the landscape and the wildlife, who would have less awareness of the humans behind. It becomes an extension of the landscape, experientially similar to moving through the marshes.

The overall effect is striking and functional. It allows for clear views to the marshlands at all points within the enclosure while also screening animals from easily seeing visitors. The form is powerful and offers multiple levels of viewing platforms.

The full selection of winners, honorable mentions, and shortlisted entries can be found here. 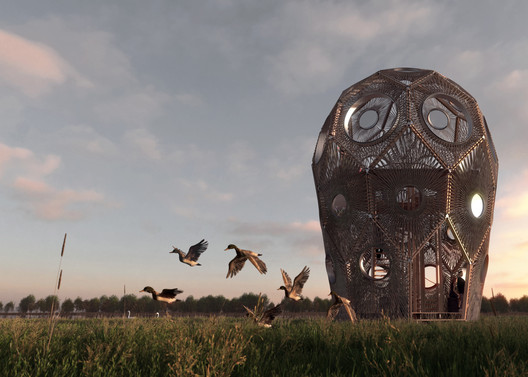