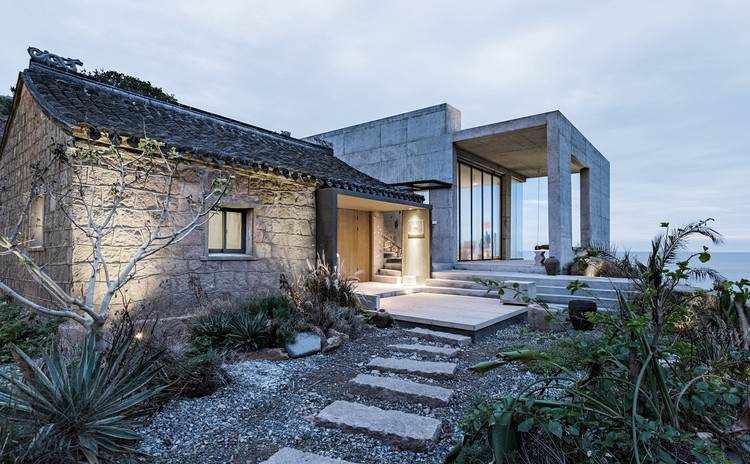 Text description provided by the architects. 70% of the houses in a village sitting on one of the Zhoushan Islands are hollow, but the stone structures, with their building material sourced from the local area, are quite solid and integrally constructed. Roofs have already partly collapsed, which can be expected when considering the technology and material conditions of the time. Two of the houses near the seaside, which have been unoccupied for 70 years and have somewhere around a four-meter difference in elevation, face the south, their gables facing the east and west, orienting them toward the sea and protecting them from typhoons. These two particular houses have been specially chosen.

Everything for these two “solid” houses both begins and ends with interior design. Between a span of three to five days, there needs to be a balanced consideration given to the local architecture, interior structures, landscape, and other spaces. Construction will only last 40 days (really 31 days), so how on Earth can everything be set up for filming in a way that would not affect local business? There are only a few hundred inhabitants on the island, with all living and manufacturing supplies coming in from the mainland. An architect faced with such a task would really have to take all these key aspects into account when finding the most appropriate course of action!

With the highs and lows of the terrain and picturesque views of the sea, the design focus here would have to be more on how to capture multi-angled views from inside the house looking out rather than merely how the house itself looks like. The house incorporated into the new design can be found on the eastern side of the collection of old houses lowest in altitude, where the only available patch of land facing the sea can be found, and it serves as a precise remediation of the lack of adequate depth and width the old houses have to carry out modern social gatherings. The new house is built with reinforced concrete and has a perfect match in terms of both structure and space while still remaining free of excessive decoration. Concrete was specifically chosen here to help the house withstand erosion stemming from the harsh sea climate.

The entire structure is composed of bedrooms renovated from the two old houses plus a studio converted from an old kitchen with collapsed roof that is now replaced by a glass ceiling. There is also a newly built reinforced concrete “box” facing the sea connecting two courtyards both on the upper and lower levels, respectively, to accommodate the upstairs master bedroom and two downstairs guest rooms. The new “box” space therefore serves as the common area for social and recreational activities.

The “new box” on the site is made to be inconspicuously retrusive. In the presence of the time-honored beauty of 70-year-old houses and the supreme natural landscape, any fresh elements seem unnecessary and charmless. That is why the new structure is meant to compliment and pay respect to the local area instead of gain a significant amount of the spotlight, which essentially underplays the structure’s full potential. Here, there is a balance between the new and old and understanding and harmony, and here, modern-day “aesthetics” and old “remains” thrive in co-existence.

Looking at the overall layout, time has made the two houses part of the old village. To the local villagers, the new box may seem obscure or even negligible. Only when you walk into the courtyard from the old street, will you discover the secrets of this new space. The “climactic” 270° seascape is saved for last when considering spatial sequencing, but when observed from above the sea, the design seems to be a new organism facing both today and tomorrow.

This program mainly concerns building renovation and design, not merely the pure alteration of interior space. Consideration should be given to public concerns and incorporate site selection along with the local environment and people, and interior design may also include how best to handle the owner’s personal issues.

Completion should mean that structures are usable then and there, with perfect harmony between building, structure, electromechanical components, interior layout and landscape. Finishing everything in terms of design and construction in 60 days (really 40 days with the Zhoushan project) is most certainly a great challenge, and the practicality and degree to which the technological requirements, need for materials, and implementation process can be completed on time should always be a determining factor when deciding upon such a task.

Today, most of our concerns are often placed upon grand narrative-themed buildings, and we usually turn a blind eye to many homes that are humble but still relevant to daily life. A great number of public buildings may seem appealing at a distance of around 200 meters or so, but up close at 20 or even 2 meters, they become significantly less refined. We pay too much attention to how good a building looks on the outside while ignoring what lies inside. Perhaps we need our houses to be pure, low-key, reserved and less “noble”, and if a TV program can entertain the public and still convey a notion that makes people more aware of the vital relationship between environment and human-made structures, encouraging them to care about our own living environment and maximize their own spatial delight and spirit made possible by architectural aesthetics, then what harm is there in making such a process entertaining?! 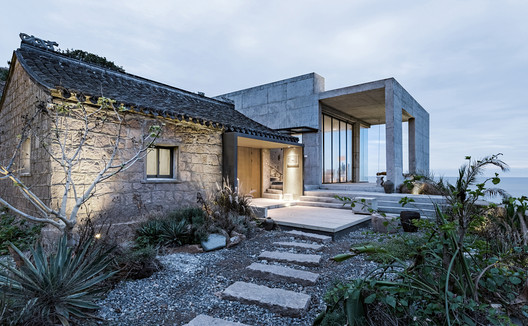