MVRDV has unveiled the design of an adaptable building to be located at the center of Munich’s Knödelplatz square adorned with 5-meter-tall (16-foot-tall) German internet slang words as a homage to the neighborhood’s graffiti culture. To be known as WERK12, the building will house flexible entertainment, restaurants, office space and a multi-story fitness center within a highly transparent envelope, allowing the building to become a vertical extension of the plaza. 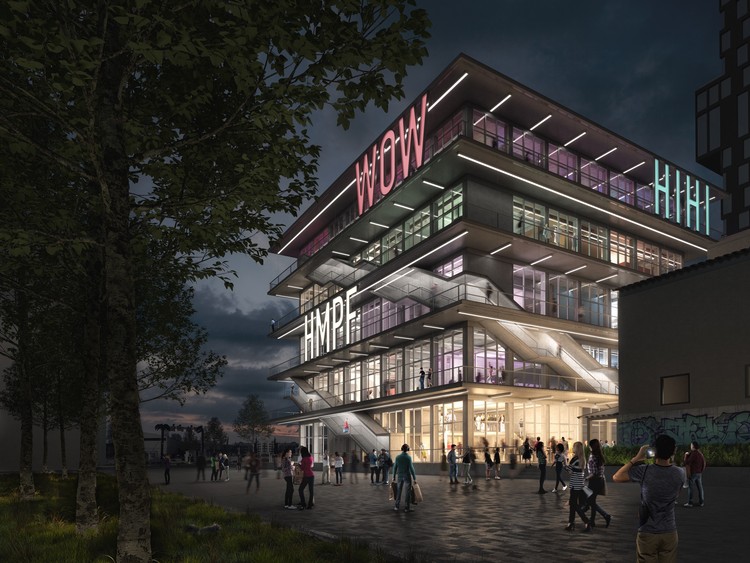 The building is sited on a formerly industrial site in the emerging Werksviertel district, and its design draws inspiration from that character. A concrete framework allows its interior spaces to remain open and flexible, dotted with individual architectural pieces housing different program.

All five floors feature generous ceiling heights of 5 meters (16 feet), each broken up by a mezzanine level housing fitness rooms, classrooms and lounges. Departing from the plaza, the main staircase snakes its way around around the outside of the building, following the perimeter of the 3.25-meter-wide (11-foot-wide) terraces that wrap each floor. These elements work in tandem to blur the borders between interior and exterior, as well as generating shading and circulation for each floor.

“The facade of the building is transparent and does not separate inside from outside and instead of isolating its inner activities, it is in constant dialogue with its surroundings,” explain MVRDV. “A transparent reincarnation of industrial times celebrating the future. “

The large words on the building facade, inspired by the graffiti and signage found on the site, allow the building to communicate with its surroundings. Designed by local artists Engelmann and Engl, the letters are intended to highlight the building’s contrast between historic and contemporary.

“The words are fractional and work with the repetition of letters. In this way, they create emotions that are not only visually perceptive but extended as an acoustic component,” describe the architects. “The ultimate contrast emerges when the building illuminates at night flipping the industrial simple geometry into a lightshow of another scale – the new selfie hotspot of Munich.”

The building is planned to open in February 2019. 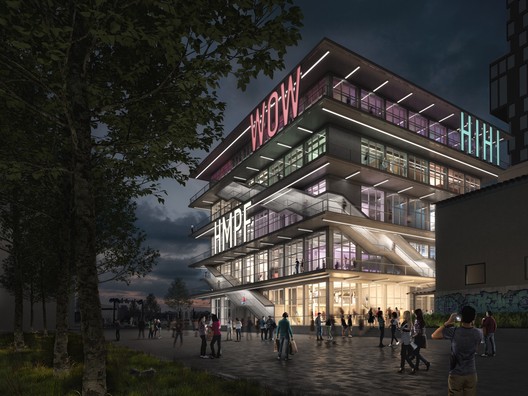