INTRO
Art is one of the greatest expressions of the human, it is something that nourishes the spirit and is perceived differently by each person. Architecture has always had an intimate relationship with art and aesthetics, however, space is not the only aspect taken into account: space is a living area and when appropriate, architecture emerges. The atmosphere and the expression of this project are based on the idea of providing building services to the client: a painter and art lover. The goal is to build a house that maintains the spirit of an art gallery on the inside and at the same time has the character of an art museum on the outside, that is, an object to be regarded and reinterpreted by each observer.

THE PROCESS
The placement of spaces was determined from imagining different routes and situations within the house that gave the user a different experience in each of the spaces that are articulating the house. One of the main requirements of the household lady was a painting studio where she would master the oil technique, and at the same time, the need of a space to exhibit her work to her guests. This provoked in us the intention of converting the social area of the house into an experience similar to that of an art gallery.

THE HOUSE
In front of the house at street level we have the parking lot, however, the pedestrian access rises 1.60 above the street level. Thus, when entering the house, you have a direct view of El Palote dam, since having views of water and the landscape was a predominant request of the family. Once you enter, in addition to the landscape, you can see the great spaciousness of the interior due to the high height of the space for the gallery and living room with access down at level zero where we also find service areas such as kitchen, dining room and bathroom. These service areas have their own height on a more intimate scale that creates another atmosphere. On this level we also have access to a terrace whose staircases are mixed with the garden until descending to this last point of the land where we find the laundry room and the gym. A wall of stone extracted from the land rises in the adjoining area to frame the natural landscape.

Returning to the access level we have a corridor that invites us to contemplate from another angle the social space and the gallery, and connects directly to the studio, which merges with the landscape and the garden by means of glazing elements that provide light and ventilation.

On the first floor we have the rooms, which are reached through a linear concrete staircase, and together with a series of domes create an almost sculptural spectacle between the light and the continuous space. From the first floor one can appreciate the space through the great central height of the house. The rooms are arranged at both ends of the lot, on the east side there are 2 rooms with a view that allows you to see the rest of the city and the surrounding landscape, a balcony that communicates the 2 rooms creating a small space of cohabitation. On the west side there is a room that faces the street, and which communicates with the open space of the house, providing certain autonomy from the other rooms, but at the same time remaining linked to the whole. Almost next to this room there is a terrace suggesting a space of cohabitation more linked to the street and the neighbors. 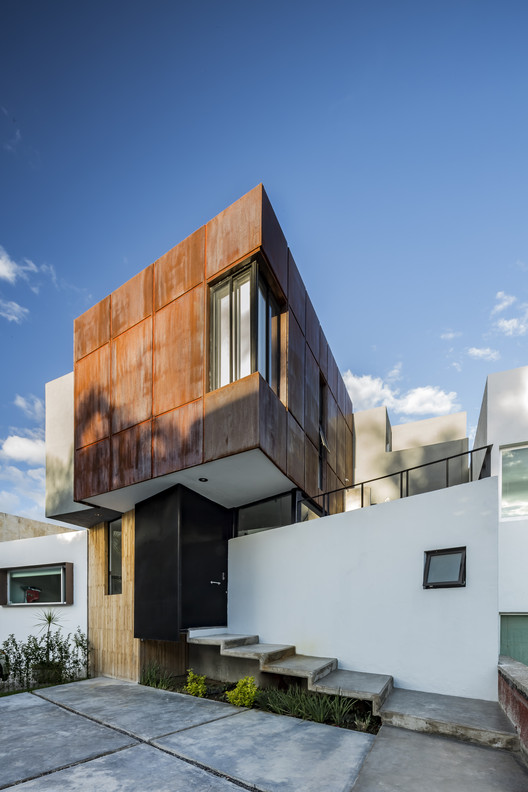