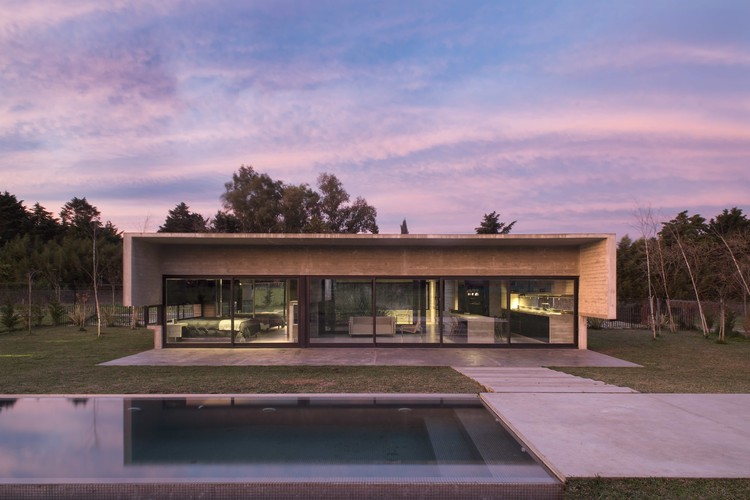 Text description provided by the architects. Mach House is a suburban permanent home located in a gated community in Maschwitz, in northern Greater Buenos Aires.

The curved streets layout defines the shape of the neighborhood’s lots and the one in which Mach House was built is a trapezoid with curved front and rear sides.

Located in the community’s border and in its highest area, the plot’s plain terrain was originally free of tree vegetation.

Having experienced what it feels like to spend some time in an exposed concrete summer house the Studio had built for his father, the commissioner requested a home for himself that shared its materiality and esthetic language.

The commission consisted in a minimum square footage house whose program of uses had to be organized in a single floor plan containing one en suite master bedroom, one secondary bedroom, a kitchen and a dining area in direct relationship with a living room that was also linked with a semi covered gallery, and a smaller living room that would function as a TV/cinema area. The commissioner also expressed his desire that the house should harbor an inner patio with plants and water.

A square floor plan with almost blind side walls was designed according to the Studio’s strategy, making the house turn inside, and open out towards the front and the rear, thus generating crossed views between the street and the back garden.

The house’s different areas were organized on a three-by-three orthogonal grid, whose central module housed the inner open space the client requested, with its reflecting pool, raw terrain and vegetation.

Sunlight enters this open module through the opening in the roof and the water surface within reflects the sunrays, producing different light effects throughout the day. These project into the house through the glazed windows and, together with the vegetation, bring a calm and intimate atmosphere to the inside.

All the framing was materialized in dark bronze anodized aluminum and is double glazed.

With the kitchen and the entrance laying on the south-eastern facade, and the bedrooms and the bathrooms laying on the north-western, the house’s side walls have small openings strategically located according to the particular needs of each area. In contrast, the front and the rear of the house open out through big glazed panes.

With the intention of generating enough privacy, a reflecting pool separates the house from the street and aquatic plants were set in front of the bedroom.

When open, the big glazed sliding panes of the rear link the indoor spaces with the semi covered deck that lies just outside.

Thus, the opening allows this part of the house to expand into a generous space closely related to the green exterior. The semi covered areas in front of the transparent planes regulate both how much direct sunlight gets in and the thermal incidence. Besides passive sun control provided by the house’s architecture itself, Split air conditioners and radiating floors heating systems were installed.

The rear of the house is endowed with long views of an exuberant grove. Facing the possibility that in time these views might be reduced by the neighborhood’s growth, a private green space with a reflecting swimming pool was designed.

The expressive substance of the exposed concrete, modeled by means of a wooden formwork, gives the house a more pure bearing. The sheltering sensation produced by the concrete’s stony essence and its monomaterialty, present on the floors, the roof and the building shell, reinforces the house’s ambiance and the way the light effects, the air, and the smells are perceived.