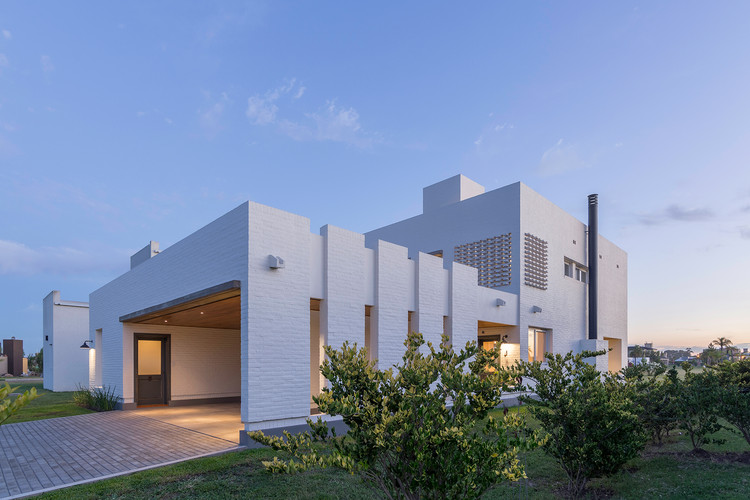 Text description provided by the architects. The project is the response to a private entrusts for the design of permanent housing of a family of four members. It is developed on the outskirts of the city of Santa Fe, in the area of current growth of private neighborhoods and countries on the Santa Fe – Rosario highway. These developments, building regulations promote exempt construction with its four facades open to regulatory withdrawals. In this particular case, the terrain is characterized by two determining variables: The preponderance of the depth of the lot, with the best visuals to the bottom (public square), and the south orientation of its counterfacade, with the challenge that implies from the climatic point of view in these latitudes.

The typological adoption prioritizes social environments and bedrooms with the view of greater landscape value and at the same time tries to solve the climatic issue from the incorporation of a CENTRAL PATIO in the proposal that incorporates direct sunsets and air currents crossed to the majority of the environments. In turn, this PATIO is resolved as an element of landscape design around which the main circulations are developed, playing as a visual filter with respect to the street, granting PRIVACY to the proposal as a particular intention of the owners.

From an aesthetic point of view, the resource used was the honest manifestation of the materials used for its construction: Common bricks in masonry, reinforced concrete seen for structural parts, wood in ceilings and glass of openings, all the constructive elements are in sight composing the general physiognomy of a project characterized by simplicity and austerity.  It is a project that bets on a design that finds in the analysis of THE OWNERS, the particular characteristics of the SITE and the rationality in the use of the MATERIALS its main project vocation.