Taking cues from the hexayurts that pop-up across the various camps at Burning Man, Weber evolved the concept to be easy-to-construct, and transportable. With the strike of innovation that comes only in the middle of the night, Weber pulled out an origami book and drew up what is now the Shiftpod. Weighing in at 64 pounds the Shiftpod compacts to 77”x13”x13” and can be assembled in minutes.

We are doing it! All these FESTPODS are going to help the earthquake victims in Ecuador! Stay tuned for more information on our fundraiser July 17 in Napa California! #shiftpod #shelterpod #responsepod #festpod #overland #festival #teamrubicon #fema #earthquake #ecuador #ecuadorearthquake

In 2015 Weber returned from Burning Man to find devastating fires in Northern California, which destroyed more than 2,000 buildings and killed four people. His immediate response was to head back to Burning Man to pick-up 20 Shiftpods to donate to relief efforts. Some red-tape and bureaucracy later, Weber learned his process to disaster relief would need to be formalized and refined.

Christian Weber launched Advanced Shelter Systems Inc. (ASSI) in December 2015. Since its opening, it has donated one Shiftpod for every 20 sold. Inspired by the greater need, (beyond tents at festivals, which is still a huge market for the Shiftpod), ASSI has designed a Responsepod and Shelterpod. “Our goal is to set up kits for individuals to take with them that have a shelter, water filtration, and everything you need for a family of four to survive for 30 days,” Weber says. “And to build systems for up to 1,600 people [that can be stored] in one container.”

Read more about Christian Webers’ Shiftpods, rescue shelters, and plans of how to make the largest impact while maintaining profits in Daniel Trediman’s article, How a Burningman Camp Project Became a Multimillion-Dollar Business. 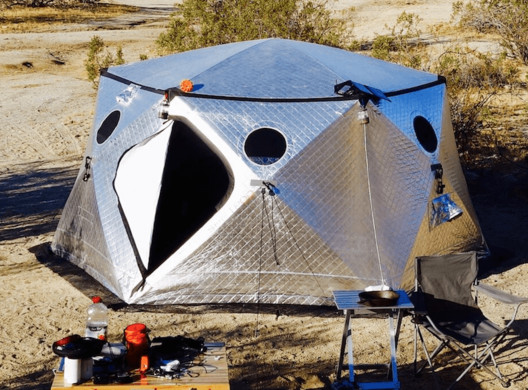