The Norton Museum of Art in West Palm Beach, Florida has announced plans for the first-ever public garden designed by Foster + Partners as part of their $100 million expansion project. To feature a variety of native sub-tropical plantings and gathering spaces, the garden is envisioned as “a new social space for the community.”

“From the beginning, we have conceived of the Norton expansion as an opportunity to create a New Norton—one that embraces its original design, while also creating a more welcoming and inviting campus,” said Lord Norman Foster.

“In our masterplan, it was important for us to define the Norton’s sense of place—in this case Florida’s lush subtropics. To do so, we conceptualized a museum within a garden. We are creating verdant spaces for art and programming that extends the museum beyond its walls.” 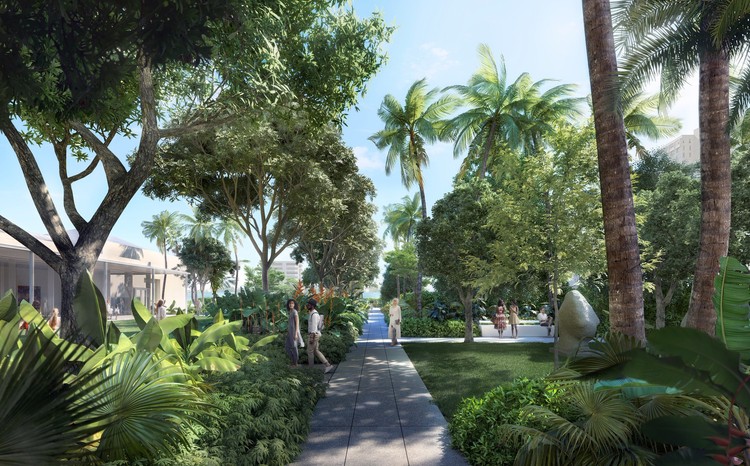 Fitting into the 6.3-acre campus masterplan, the new landscape will feature a series of Art Deco-inspired pavilion circling a central courtyard to create shaded corridors linking “garden rooms” along the southern axis of the Museum. Lush plantings will frame individual spaces within the Pamela and Robert B. Goergen Garden, which will house 11 notable art works gifted by the the couple to the museum including contemporary pieces by Keith Haring, George Rickey, and Mark di Suervo.

At the center of the plan, the “great lawn” will serve as an open-air venue for the Museum’s “Art After Dark” program and other events, performances and screenings. Inspired by a historic banyan tree planted on the museum’s opening in 1941 (which will anchor the new museum entrance to the west), Foster + Partners have also included a “mature garden” featuring eighty-two mature trees whose canopy will immediately interact with the expansion’s curving roof structure.

Other planned elements including a new entry forecourt featuring a reflecting pool and a monumental, 43-foot-tall, semi-reflective metal canopy cantilever 45 feet out from the building facade. An opening in the canopy will gesture toward the 85-foot-tall banyan tree.

New interior spaces that will interact with the garden include the 210-seat Stiller Family Foundation Auditorium; the Jane and Leonard Korman Room; and the Leonard and Evelyn Lauder Restaurant, with outdoor dining space located on the John and Marjorie McGraw Terrace. The 3,600-square-foot, 43-foot-tall Ruth and Carl Shapiro Great Hall will connect all these spaces, offering gathering and relaxation spaces with lounge seating, a coffee bar, piano and book carts.

The expansion will also include 12,000 square feet of new gallery space for seasonal exhibitions and the Museum collection and the William Randolph Hearst Education Center, which will more than double the current amount of educational facilities. Other projects related to the masterplan include the restoration of six 1920s-era houses located south of the garden to serve as studios for artists-in-residence and the new Director’s Residence.

Construction on the project is already well underway, having topped out in June of this year. The project is slated to open to the public in February 2019.

Learn more about the expansion project in our previous post, here.

Newly revealed designs for the @NortonMuseum Garden reinforce relationship between building and landscape serving as a new social space. pic.twitter.com/Q5LOouFQok

Foster to Break Ground on Norton Museum Expansion in Florida

UPDATE: Foster + Partners Norton Museum of Art expansion will official break ground tomorrow, February 6, following the Norton's annual Gala celebrating its 75th anniversary. The project, which will transform the museum's West Wing, increase gallery space by 35 percent and add a new auditorium, great hall and education space to the building, is expected to complete in 2018.