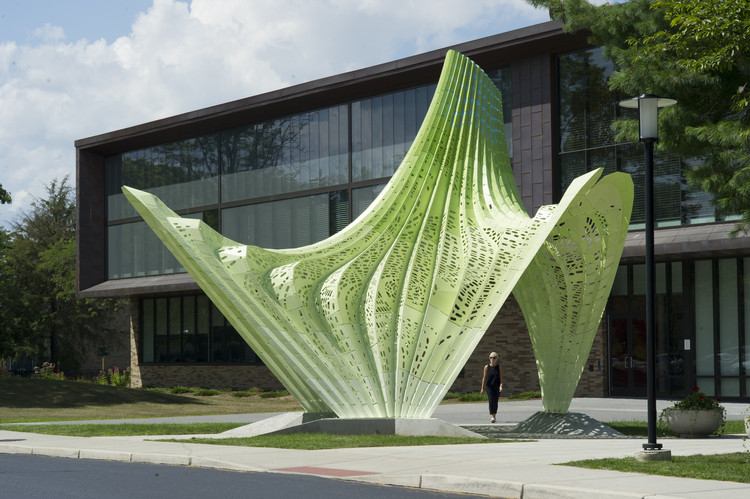 Text description provided by the architects. A hyperbolic surface thrusts itself into the air at the entrance to Rhode Island College’s Fine Arts Center, as a dramatic opening to the campus scene. In a burst of bright green curves, it enacts a threshold to creative practice and ushers studio-goers, faculty and campus visitors alike toward inspiration and action.

HYPARBOLE’s multifaceted formal character draws visitors in from all angles. Its three paraboloid edges peel up towards distinct directions of approach, and its stature ensures that it is visible from the extents of the site, yet it never detracts from the building that it announces. Inside, it provides a whimsical and unfamiliar environment in which lingerers and passersby can lose time under a dappled light. Revealed within is an oculus with a magnetic pull: a central opening in the surface projects up to a height of 22’. Your instinct is to gaze up, but inevitably you are lost in the push and pull of the form, its patterning, its improbable height, and thinness.

The aluminum structure assumes the geometry of a hyperbolic paraboloid, or hypar: a three-dimensional, double-ruled surface that can be described using infinite planar, linear elements to form a smooth surface. With reference to Felix Candela’s experiments with the hypar geometry in thin-shell concrete, our three-legged structure relies on its double-curvature for support. The addition of a pleated base lends additional resistance to lateral loads--an inherent weakness of the hypar’s flat sides. The ultra-thin aluminum shell merges skin and support to great atmospheric effect. Its lightness is further emphasized with porosity. Cuts in the shell are derived from simulated flows across the complex surfaces. These openings produce dynamic light conditions, which change the character of the space throughout the day and emit an unearthly glow at night.

The College, a site of experimentation and discovery, makes an appropriate home for HYPARBOLE. The structure is itself a product of deliberate and focused research, several years in the making, and builds on the studio’s efforts to unify structure, form, and experience into a coherent material system. Following a process of iterative development and prototyping, HYPARBOLE in its final form stands delicately and confidently at this focal point. Measuring an imposing 22' high, 25' wide, and 30' deep, it is a force majeure touching down on only three concrete bases. 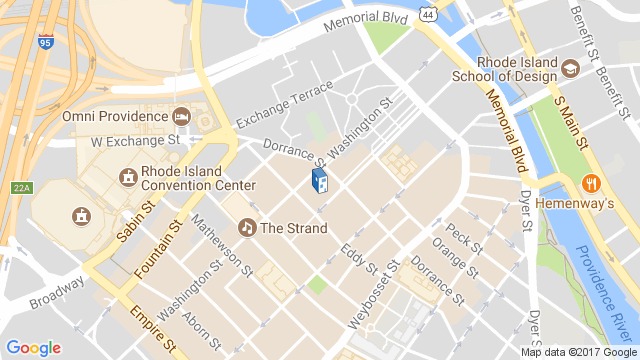 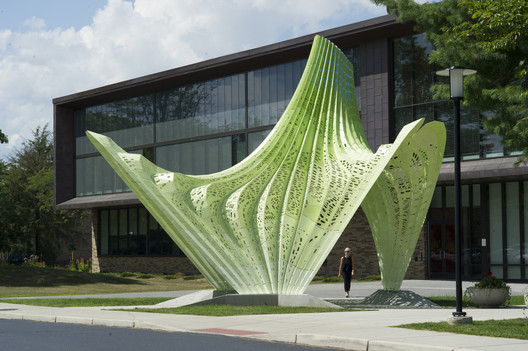