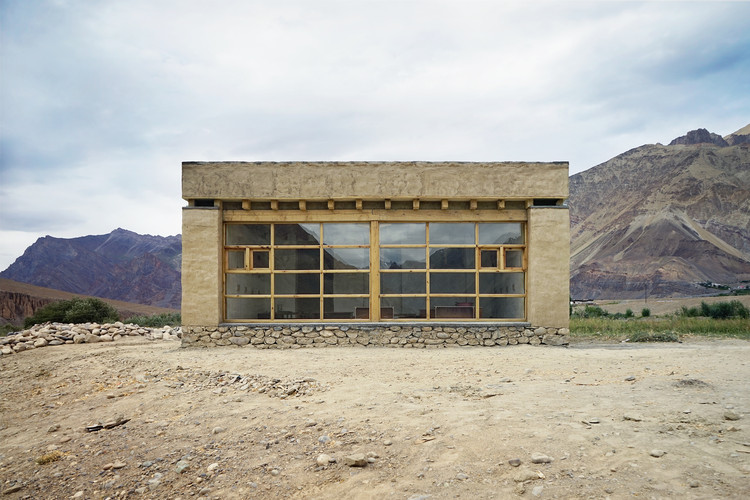 Text description provided by the architects. The project was requested by Tanpo village community, in the remote valley of Zanskar river in Ladakh, the Indian Himalayas. The main architectural challenge was to provide a viable environment without burning fossil fuel in the Himalayan winter, for education purposes. Probably due to the small percentage of the ladakhi population inside India, no Ladakh-specific school standard plan has been developed for the region, the same buildings are being built like on lower altitude areas of Jammu&Kashmir. These buildings, lacking heating and insulation, are not suitable for winter use at 3800 meters altitude above sea level. Thus the Himalayan region suffers from a forced winter break lasting 3 months.

The local community of Tanpo village had a regular sponsor to finance their teacher for the winter education since 2011, but they had to hold classes at altering locations in different living rooms. Csoma's Room Foundation, an NGO registered in Hungary, has been active in the region since 2008. They started out as a monument conservation project based on volunteers, later developing into a social enterprise focusing on education and sustainable development. A sight to Sky, an NGO from Singapore, the Title Sponsor of the Tanpo Solar School, has been organizing medical missions to Ladakh since 2015 with volunteers.

The Tanpo Solar School is the second of the schools designed and constructed by the Foundation. The program was requesting a solar room providing shelter for 25-30 kids during winter daylight hours. The simple geometry and the robust volume was devised to get in dialogue with the highly functional approach to the local architectural context and to provide a confirmation for the community of their traditional values. The location was chosen together with the village, considering the optimal access from the houses and flood safety, on the upper embankment of Zanskar river.

The design attempts to achieve a low ecological impact, by the use of locally collected construction materials, like stone, pebble, and mud. The beams and planks came from lower areas of Ladakh, and the glass was the only material that came from an industrial source, having no traditional substitute. The foundation is a mere 30cm deep, shallow by western standards, but following the local tradition that proved to be sufficient for centuries. The lower part of the wall is built of stone to another 30cm above ground, to reach the inner floor level. The upper wall structure is built of two layers of 30cm sun-dried mud bricks, with locally sourced straw insulation between. The mortar was the same mud used for making bricks.

The huge window facing almost South has a double glazing, a simple, yet unused (for financial considerations) technique by the locals. The two opening window panes help the ventilation necessary on sunny days. The corridor on the North acts like an extra insulation towards the coldest direction that never gets sunshine. The corridor has a window to the West for proper light, shelving and washbasin on the left, and a long bench to the right. The classroom has some shelves and a wall with a pattern of protruding wooden sections to provide nailing possibility for a board and some posters. The roof features a hidden water drainage with a hidden pyramidal slope and double spouts to the Eastern and Western sides.

The building gets warm very soon after sunrise, thanks to the large windows acting like a greenhouse, and cools down soon after sunset, mainly through thermal radiation through the same windows, but the teaching only lasts during daylight. The project aimed to become an open source design, available for reuse, and as an inspiration to the locals. Through the community involved construction, the principles of planning have already begun to spread in the region. 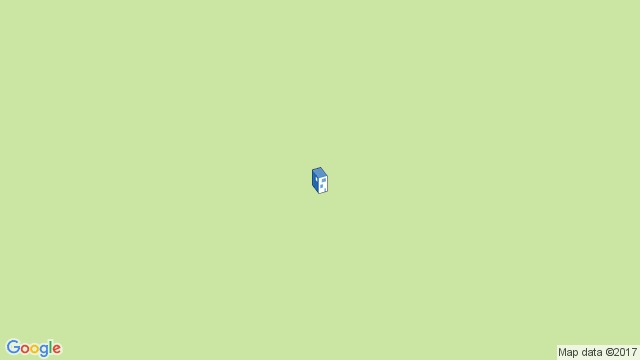 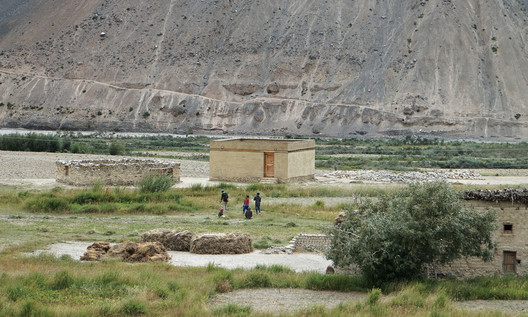 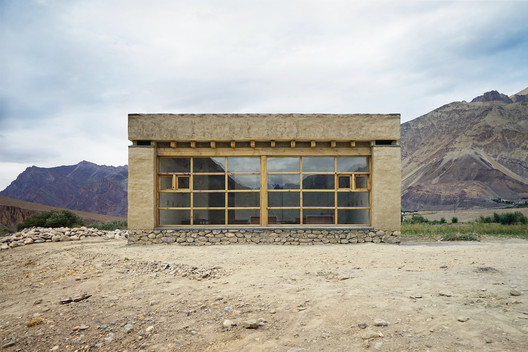