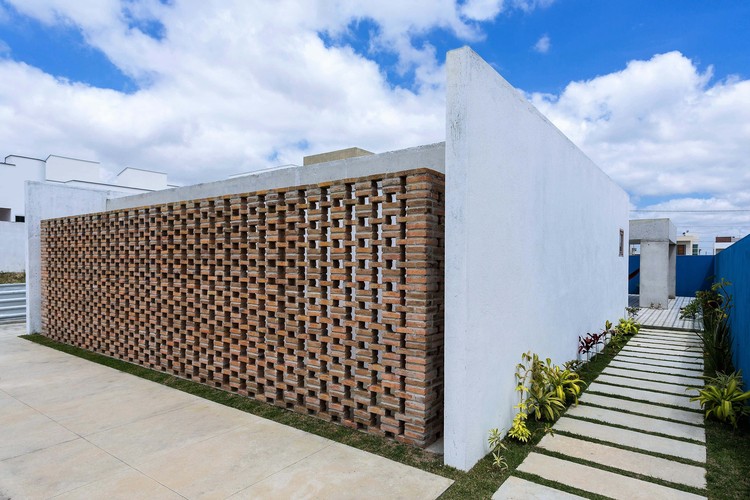 Text description provided by the architects. We are looking for a contemporary and genuine architecture from Pernambuco.

Located in a private condominium on the outskirts of the urban perimeter of Caruaru, the main city in the rural area of ​​Pernambuco, the plot of land has southeast orientation, with a higher incidence of winds during the year.

We opted for a simple architecture in the ostentation aspect, but great in the matter of the emotion, of the sensorial symbiosis. We can say that this "way" is absolutely related to the personality of the architects, holders of an intuition more contained in the act of projecting, but sometimes implodes of so much artistic expression and meaning.

Cobogó House is another architecture that emerges from the emptiness, almost central, a place of arrival, which precedes a subtle architectural promenade.

Natural materials such as wood, handmade as hydraulic tile, and apparent and "raw" as concrete, iron and glass, coupled with a subtlety in the use of colors and a low ceiling (2.26m - to the height of the average man with raised arm of the Modulor) give the place a warm and "human" ambience.

The most pragmatic challenge of the project was to meet the relatively large needs program for the lot size (375sqm) and a desire for large and sometimes open spaces. All this in a single floor. The natural solution was to integrate "mandatory setbacks" into environments, eliminating any "dead space" within the boundaries of the terrain, both in the external and internal areas. We can clearly see this intuition from pedestrian access, through the terrace, as well as the garage and the organic garden.

Evaldo Coutinho defended architecture as a product of construction, not design. And that the only way to feel its spatial essence was to be in the work itself. The fact that we designed and built the work allowed us to do experiments once more during the execution, which was certainly fundamental to the final result.

Two other important aspects for us were environmental comfort and privacy control. walls, marquises, hollow brick wall, strategically located and dimensioned frames, are some architectural elements that appear as a solution. In some cases, elements, such as the "skin" (apparent manual brick wall) of the front façade that protects the rooms, appear as a solution to both problems. Because it is a leaked wall, it allows the passage of lighting and natural ventilation while giving privacy to the users of the house and allows the street view to them. In addition it is clear from an aesthetic and poetic appeal.

Considering the functional dimension of the house, two premises were important in structuring the plant. We wanted the possibility of two independent and distant accesses, one for a vehicle and another for those who came on foot. It was important for us both to take us initially to the social area of ​​the house. In this way, the room appears with a kind of vestibule, only located in the center of the building, which gives direct access to the intimate area and kitchen. A practical and simple solution.