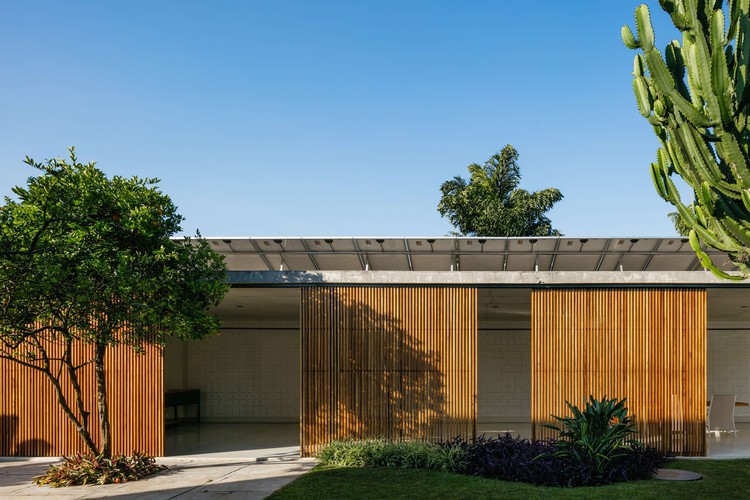 Text description provided by the architects. The residence, located in the Campo Belo neighborhood, in the south of the city of São Paulo, was originally designed and built in 1959 by its first owner, the Franco-Brazilian engineer Humbert Monacelli. The 780m2 of constructed area building is implanted in a rectangular ground with 30m of front and 50m of depth, composing an area of 1500m2. From the street to the back there is a slope of about 1m. Its original design presents characteristics of the São Paulo modernist architecture of the time, with rationalist traits, has a structure partially independent of the walls, free plan, a glass panel and loose volume of the floor.

The main U-shaped building has a large garden in front and another inside the ground floor, which is embraced by the building. Both gardens were redesigned in a landscape project that valued mainly native plants and are configured as important extensions of the spaces of the residence.

The customer’s main desire when he came to us was to have a clearer division of the spaces of the house with a better separation of the social, intimate and service areas. The owners are very fond of organizing meetings, from intimate dinners to large receptions, and they wanted more generous and dynamic spaces to be able to receive their guests in various ways. At the same time it was important to create an intimate area, separate from the rest of the house, and redesign the service area and the flows.

The architecture project of Jamelo Arquitetura redistributed the functions of the spaces within the existing house, redesigned the circulation between these areas and the articulation between them, adding practicality and comfort to the different situations in which the house would be used. In addition, thinking of the occasions when there are guest receptions, was designed a new building adjacent to the backyard, where before all the space was subdivided. With free plan and sliding wooden brises, it extends the transparency between the spaces, one of the main features of the project.

In the enlarged reform, executed in 2015/2016, the building was completely modernized thanks to the incorporation of infrastructure solutions that are more current, sustainable and rational, making use of advanced technologies. A 10.5 kWp On-grid Photovoltaic Solar Plant was installed on the slab of the lateral pavilion, which operates connected to the public grid, one of the first of its kind in a private residence in São Paulo. In addition, a conventional solar water heating system was installed. In the back garden, where there was a large and deep pool almost never used, a tank of 10,000 l was installed to collect rainwater, which will be reused in the garden and in the toilets. In all spaces, natural cross ventilation was favored, establishing greater climatic comfort and reducing the need for air-conditioning.

Regarding finishes, we seek to recover and establish a dialogue with the original characteristics of the building, valuing and complementing them. The original porcelain tablets and stones beside the social entrance door were cleaned, recovered and complemented. For the pavilion was specially commissioned a mural of tiles by the Brazilian artist Alexandre Mancini, made of white ceramic tiles with metallic platinum paint.