The Natural History Museum of Los Angeles County (NHM) has released concept designs for the new NHM West/South Project – a scheme designed by LA firm Frederick Fisher and Partners (FF&P) in the first step towards a 10-year revitalization of the NHM as Exposition Park’s historic hub. The extensions would focus on the west and south sides of the museum, supporting new uses and reimagining the programs and spaces of its famous Ice Age fossil site at the La Brea Tar Pits and Museum in Hancock Park. 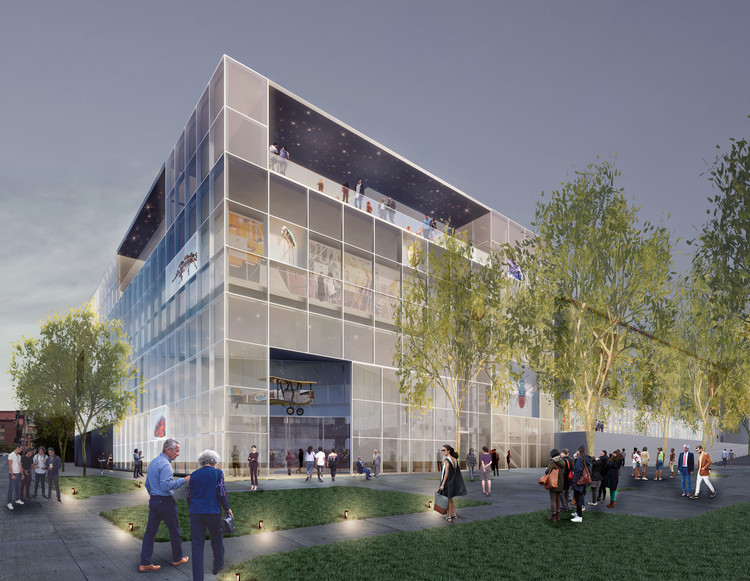 County Board Chairman Mark Ridley said of the project:

Exposition Park, and the Natural History Museum as its anchor, is about to enter the world stage as a cultural, entertainment, sports, and education destination. Its audiences are twofold: local Los Angeles County residents and visitors from all over the world, and the park partners need to connect with both. This new project provides a vibrant and transparent window into the mysteries of our world and will be an exciting and welcoming venue for the entire community.

A facilities program plan for the Exposition Park museum campus has been developed by the NHM and FF&P to address increasing capacity, flexibility and transparency of the gallery space by improving the visible storage of its collections and creating a new study center. This program plan should serve as a catalyst for the architectural design process to follow.

A multi-purpose, immersive theater is proposed as a gathering space for the Exposition Park community and surrounding neighborhoods to encourage and facilitate dialogue about critical issues affecting the cultural and natural worlds. Another preliminary concept suggests replacing the existing Jean Delacour Auditorium with a new addition that would bookend the mass of the museum and complement the heritage attributes of the existing structure. A façade of glass with varying levels of transparency would respond the the desire to create openness within the park and the community, with visitors to the South Lawn able to see into the museum.

A new entry to the building at the southern corner would act as a kind of “front porch,” extending the length of the southwest perimeter. A double height lobby would invite visitors into a Welcome Center and to a transparent passage towards the Grand Foyer. The proposal suggests a reworking of the gallery and office spaces of the museum to create a more interesting overlap between research activities, educational programs and the display areas. Tourists and locals would also be drawn to a proposed rooftop restaurant with panoramic views of the immediate context and the wider city as a whole.

As a national leader in research, exhibitions and education and accommodating close to 1.3 million visitors annually, the NHM has been a crucial cultural landmark in Los Angeles since 1913. Its 10-year Next transformation, completed in 2013, generated award-winning exhibitions. This future 10-year plan will seek to resolve elements of the future of the museum that were not addressed. With the architectural design and guidance of FF&P, the NHM hope to further and represent their research of “a museum paradigm that once focused on the past, but increasingly addresses the present and the future.”

Completed in 2010 in Los Angeles, United States. Images by Benny Chan, Iwan Baan, Jac Currie. The new building for the Los Angeles Museum of the Holocaust (LAMOTH) is located within a public park, adjacent to the existing Los Angeles Holocaust...

In the latest episode of what has become a dramatic narrative worthy of its own space opera, The Lucas Museum of Narrative Art has revealed plans for their two newest hopes: prospective museum designs, one in Los Angeles and one in San Francisco, that could serve as the new home of filmmaker George Lucas' eclectic personal collection of artworks, costumes and artifacts.