In the latest episode of what has become a dramatic narrative worthy of its own space opera, The Lucas Museum of Narrative Art has revealed plans for their two newest hopes: prospective museum designs, one in Los Angeles and one in San Francisco, that could serve as the new home of filmmaker George Lucas’ eclectic personal collection of artworks, costumes and artifacts.

After their failed proposal for a mountain-shaped museum along the Chicago Waterfront, the museum has again tapped architect Ma Yansong and his firm, MAD Architects, to design both proposals for the California sites, the first along the water on Treasure Island in San Francisco Bay, and the second for a site in Exposition Park in Los Angeles, adjacent to the city’s Natural History Museum and the Coliseum.

The two proposals feature similar specs (between 265,000 and 275,000 net square feet and 90,000 - 100,000 square feet of gallery space), and a similar fluid architectural language. As opposed to the soaring tent-like museum envisioned for Chicago, both designs are relatively low-lying and compact. Yet each reacts to its context in appropriately unique ways.

On the Treasure Island site, the museum has been placed along the water within a larger master plan for the island designed by Skidmore, Owings and Merrill. To combat the site’s blustery seawinds, MAD has chosen to move the majority of the public space inside, instead providing large, glazed surfaces that look out over the water and toward to San Francisco skyline.

Meanwhile, in Los Angeles, the bulk of the museum would be lifted above ground level, preserving a large percentage of the ground area for a brand-new park. The vegetated outdoor areas would continue onto the building roof, adding 6 to 7 acres of green space to a site currently occupied by a surface parking lot. To accommodate for the lost parking, an 1800-vehicle garage would be constructed under the museum.

Both proposals have already gained the support of their respective city’s mayors, but their support doesn’t make the museum a shoe-in for public acceptance; in Chicago, despite vocal endorsement from Mayor Rahm Emanuel, museum plans were still undone by the efforts of local activist groups.

The Lucas Museum is expected to decide upon a site by early 2018, after which they will continue to refine the design for realization. 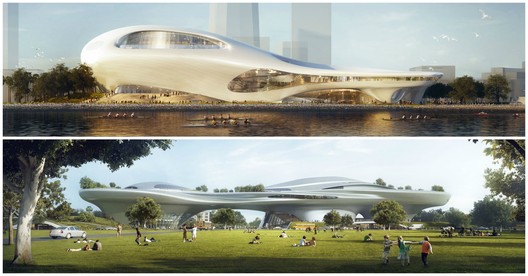