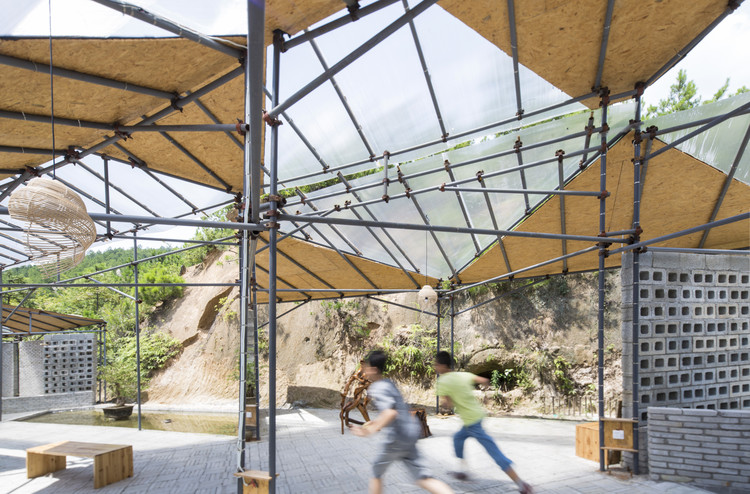 The project is located in Hubei Qichun mountain area, in the Qianyi abandoned primary school farm transformed into a hostel （Farm inn）on a high post (See UED 2016, Issue 4). There is a vegetable field between the north side of the inn and the hills. With the increasingly frequency of activities of the inn, the farm team began to imagine on this north area which is used to be a sweet potato plantation.

This piece of land which has good view of the village and terraces, was formed in the period when people excavate the site of the original construction of primary school, and in between of hill and the inn. The program extends through the length of the former hotel, hosting entertainment activities for guests such as bamboo weaving, picnicking, singing, small gathering, long table banquet (or meetings), rest and sightseeing, and so on. With the construction of the farm, this “workshop” can be demolished and re-built in other places since it was decided to be a low cost non-permanent building because of the low funding of the farm.

In response to the needs of the site, the building can be reworked and demountable, the construction must touch the earth and reversible, so the construction site used scaffolding “structure", columns and beams are steel pipe, malleable iron fasteners fixed and connected to each bar. Therefore, control of structures and spatial scales can be obtained.

In order to facilitate disassembly and assembly, the basic structure space units with four columns are adopted, and arranged regularly by way of uniform modulus. The column is made of two galvanized steel tubes. The foundation is made of precast concrete square pile, and the embedded square pile can be dug at the later stage; the steel pile is connected with C steel. The column is made up of several steel tubes which are transversely connected with the beam in order to form a whole structure. At the same time, the diagonal bracing member is added to ensure the stability. "Purlin" and "rafter" galvanized steel pipe laying, nodes use steel fasteners, the roof is made of particle board (sheathing and bolts), shingle and sunshine plate laying.

The plan of the building complies with the terrain, adopted 4.5mx4.5m oblique column, can deal with both ends and the middle entrance, but also reflects the hills and building clamping feeling. At the same time, the separation and organization of the interior space are more vivid.

The pond and the wall divide the workshop into several functional areas. Near the west entrance is the music bar area, the middle part is the landscape pond and the children activity and the reading place, on the east side is the tea room and the conference area, also has the viewing function.

In fact, this derives a set of construction systems: the regular arrangement of the point-like pile foundation, unified modulus of the plane and structural sections, in order to minimize the steel pipe, malleable iron fasteners and other components of the type, can be freely assembled into any area, scale and use of buildings.

Based on the sun angles and ventilation considerations, the application of high and low staggered layer of the double pitch roof is lower than the inn to reduce the blockade of the room. Due to the rotation 45o of column grid, the roof has been divided into series of triangles, and respectively adopted sun hollow sheet and linoleum, it not only makes the the workshop full of light, but also looks like floating on the site which result from the stagger changing roof  supported by the thin and light tube columns.

The main structure uses low technology that is easy to construct, as well as the wall separation adopted the most common concrete hollow block brick. The concrete block wall is rotated 90 degrees in the horizontal direction, the hollow part can form a vertical lattice wall for planting. The block of the wall of meeting room vertical flip 90 degrees, so that the wall forming orderly holes. It makes the sun shines into the chamber to form a mottled light effect, increases a lot more storage space as well.

This low cost, low technology and reversible construction experiment aims at returning to the basic problems of construction, meeting the needs of the use, integrating into the environment with low impact, and providing more possibilities for rural construction.

After the local villagers, farm workers and graduate students team built, the farm began to organize some activities, decorate and secondary design. The hollow block brick is painted in white, the bonsai have been placed in the original activities space, water plants begin to grow in the pool. It gradually enriches the original design in the walk route and the scenery view, which make the inside and outside space ambiguous and some feeling of garden or courtyard. The old bamboo craftsman installed bamboo lamp-chimney, the carpentry villager polished some root carving. The Inn staff tangle the "column" with rope and move old piano from the foot of the mountain.

The original design conceptions of this scaffolding architecture include removable and other changes. In fact, the mobiles are more idealized, immobilization is real situation. It is changing in an instantaneous state rather than in a fixed form. 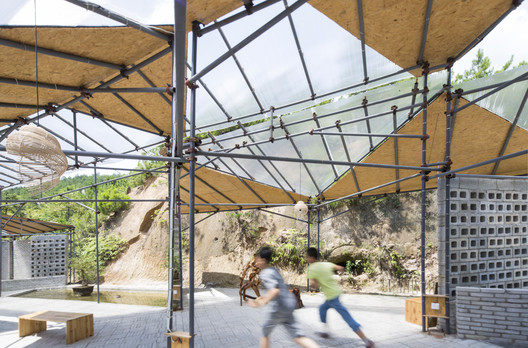