Save
Xanc i Meli Restaurant / AMOO 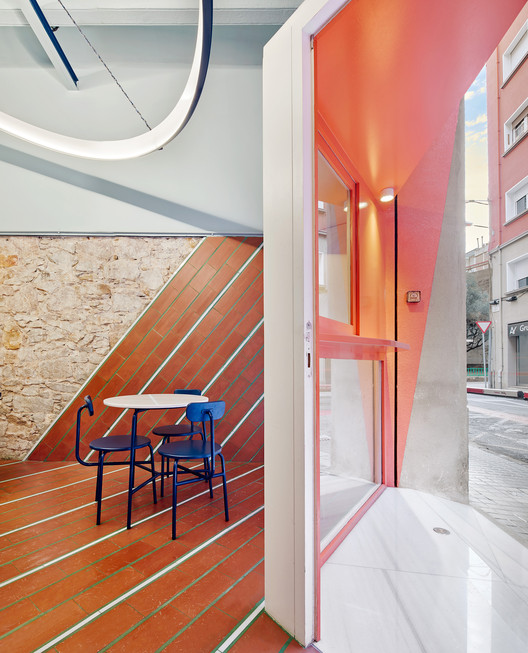 Text description provided by the architects. The establishment is located on the ground floor of Francolí street number 53, Barcelona. Physically, it has a tube-like structure of 17x3,80m. The first decision, bearing in mind it had closed its doors more than 10 years ago and the state of conservation was quite precarious, was to rehabilitate the most damaged elements and to preserve the premise’s original structure, without intervening in it.

Conceptually, the owners bet on a Catalan traditional cuisine restaurant, which offers classic dishes such as escabetxos, ofegats, and suquets, but trying to give them a contemporary touch. Likewise, it is also a place where you can have the typical vermouth during the weekend. This implies, at the establishment’s distribution level, having a bar but also tables. Because of the initial load-bearing walls, we decided to maintain them, dividing the space into three sectors:

LOUNGE: The entrance area is kept clear, without invading it with the bar. Instead, gathering tables with lateral bars are included. The height is preserved.

BAR: It is placed behind the first load-bearing wall, respecting and making the most out of its openings. It disposes of a direct vision to the lounge, and in this space, you can also find the kitchen. The main bar is assisted by lateral support bars. The height is variable, gathering up the working zone for the installations.

HALL: Having already passed through the bar and the access to the restrooms, there is a collected space of reduced height which is used for the most intimate and relaxed meals with tables and chairs in front of a bench. This area, initially dark, rests on a patio that has been coated and, as for the light, it has been treated in order to provide the client with a feeling of open and fresh air.

By means of the materials, the geometries and the way in which they are arranged, there is a wish to establish a conceptual dialogue with the proposed establishment: Catalan traditional elements of construction but disposed of in a way that breaks with the preconceived idea, contributing with the necessary modernity. All of this intervention is made from level 0 to 2.20: as from this height, it is plastered and everything is painted with the same color.

WALLS: It is decided to peal the existing walls, and different works of masonry and factory work are found, either with a solid brick bond disposed to a rope or a partition wall. Those new wall hangings or those which are considered of little interest, are covered and painted or are covered with milled and painted DM.

PAVEMENT: A conventional slab floor is placed, the most humble base material of the traditional Catalan masonry, but it is arranged at an angle and with a joint of 1cm in the longitudinal sense and with a closed joint in the transversal, remarking the direction of the pavement. At the entrance, for every 3 strings, strips of white marble are placed which emphasize even more the directionality and add depth. In the intermediate zone, linked to the bar, a pavement of 60x40cm marble tiles is disposed of. The pavement is the grid that will mark the geometry of the unique elements.

UNIQUE ELEMENTS: Around the pre-existence, creoles and walls are created, and they help to finish giving shape to space and serve as a support to the main bar and the auxiliary. These elements are covered with white marble, a material traditionally used for bar’s and cellar’s bars.

FURNITURE: Stools and tables are designed and unified with the chairs and other metallic elements by glazing them with the same color. As a highlight, there is the lamp situated in the main space, also designed ad-hoc, of 3m of diameter and suspended and inclined towards the entrance. 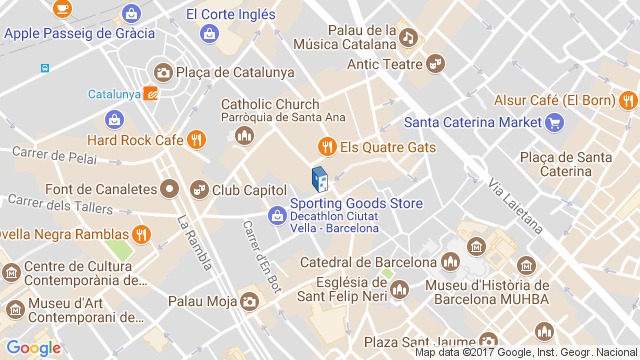 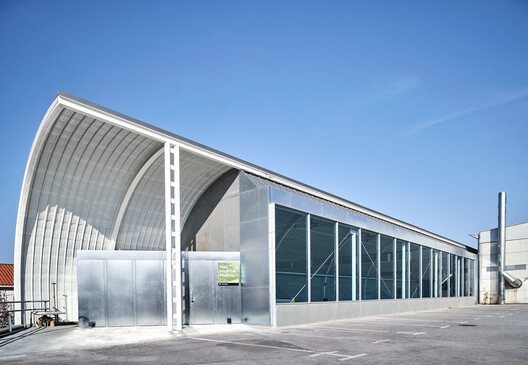