Save
The Spectacular Stories Behind 7 Ancient Lost Landmarks

Architecture has been historically deployed as a tool to construct and concretize legacies. Whereas only a few built edifices have left a large enough impact on the world, or have been around long enough, to enter into the canon of architectural legend, the seven wonders of the ancient world have achieved both. With only one—the Great Pyramid of Giza—still standing, the others have all taken a unique position in the architectural imagination, with representations over the years of structures such as the Colossus of Rhodes and the Lighthouse of Alexandria changing according to the whims of artists of the time. Nevertheless, the spectacular stories behind each of these lost landmarks is worth revisiting – which is exactly what travel company Expedia has done in this series of illustrations. 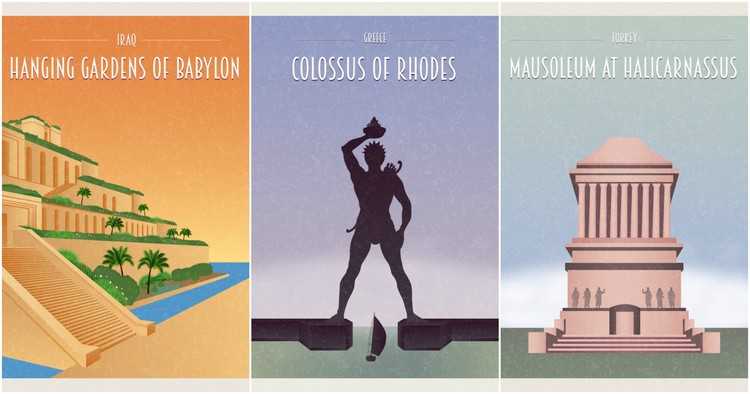 It’s said that the Babylonian King Nebuchadnezzar II constructed the Hanging Gardens as a gift to his wife, Amytis, who longed to be back home in the greenery and lush gardens of her native country, Media (today, north-western Iran).

Both the Greeks and Romans wrote about the Gardens, describing the location as a botanical oasis; prosperous in vegetation, surrounded by exotic plants and herbs, and with tall stone columns. In Hellenic times, many said it was situated in the ancient city of Babylon, which today, is Hillah, Iraq.

Erected in the city of Rhodes in 280 BC, the Colossus of Rhodes was a statue of the Greek God, Helios. It was built in celebration of Rhodes’ victory over the ruler of Cyprus, Antigonus I Monophthalmus, whose son failed to take control of Rhodes in 305 BC.

The Colossus was constructed out of bronze plates over an iron framework, a very similar way to which the Statue of Liberty was made. Many have also compared its height (33 meters) to the American landmark, believing it was approximately the same size (from feet to crown.) The Colossus of Rhodes has been described by historians in various ways, with many debating its actual position, and in particular, whether it actually straddled the harbour of Rhodes. It was destroyed in 226BC by an earthquake, which caused major damage to the city and was never rebuilt.

The only Ancient Wonder which is still in existence today, the Great Pyramid of Giza, is an iconic symbol of Egypt and is the largest pyramid in the Giza pyramid complex.

According to Egyptologists, the pyramid was built during a 10-20-year period, eventually coming to completion at around 2560 BC. Despite differing theories as to the Pyramid’s purpose, it is widely acknowledged that it was created as a tomb.

The Pyramid of Giza was the tallest man-made structure on earth for more than 3,800 years, until Lincoln Cathedral in England, surpassed it around 1311 AD.

The Mausoleum at Halicarnassus was built for the satrap, Mausolus (ruler of Caria), and his sister-wife, Artemisia II, between 353 and 350 BC. The tomb, based in present-day Bodrum, Turkey, was designed by Greek architects.

When Mausolus died in 353 BC, Artemisia II continued developing the elaborate tomb as she ruled the capital alone. It was built upon a hill, which overlooked the city, and it sat within an enclosed courtyard. It was built out of marble and embellished with statues and war themed bas-reliefs.

The tomb was destroyed by series of earthquakes between the 12th and 15th century. Mausolus’ tomb became so well-known that the word ‘mausoleum’ entered the language and today is used to refer generically to an above-ground tomb.

This temple, dedicated to the Greek Goddess, Artemis was located in Ephesus (near the present-day town of Selçuk in Turkey). The temple was rebuilt three times before it was destroyed for the final time in 401 AD.

The first temple on the site was built in the Bronze Age, but was destroyed by a flood in the 7th century BC. Then, around 550 BC it was reconstructed. However, this temple was destroyed by an arsonist named Herostratus in 356 BC, and it was reconstructed for the final time in 323 BC. This reconstruction is the Temple recognised as the Wonder of the World, however today, only fragments remain. The site is marked by a single column which has been constructed using various fragments discovered on the site.

Statue of Zeus at Olympia

The Statue of Zeus was created by Greek sculptor, Phidias, around 435 BC. The giant sculpture of the Greek God himself, seated on a lavish throne, could be found in the Temple of Zeus, in Olympia, Greece.

Commissioned by the custodians of the Olympic Games to outshine their rivals in Athens, the Statue of Zeus was made out of Chryselephantine (gold and ivory) and was around 13m high. It took around 12 years to make. The statue was destroyed during the 5th century AD (allegedly due to a fire, but there is no concrete evidence on how exactly its destruction came about). No remains of the site have ever been found.

The lighthouse stood over 100 metres high and became a prototype for lighthouses around the world. It was damaged over the years due to earthquakes and was an abandoned ruin by 1480. Some of its remains were used to build the Citadel of Qaitbay.

In 1994, archaeologists embarked on an underwater expedition led by Jean-Yves Emperuer, and found remains of the lighthouse near Alexandria’s Eastern Harbour. The discovery led the Egyptian government to work with UNESCO to add The Bay of Alexandria to the World Heritage List of submerged cultural sites.

These illustrations and text were created for Expedia's Lost Landmarks series.