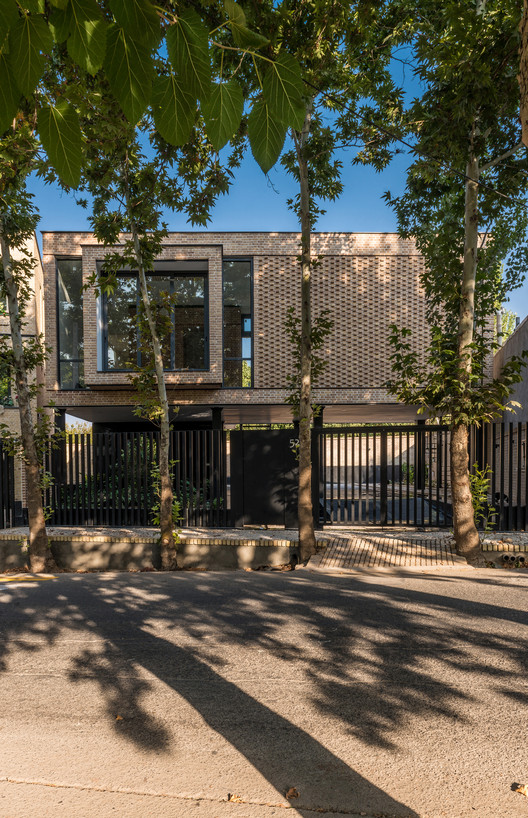 Text description provided by the architects. Located in Natanz’s suburbs, this small plot of land was chosen to become the home of a cozy villa with a limited budget for construction. The client’s main demand was preserving the view toward south-east horizontal gardens for all interior spaces while maintaining their privacy. In addition to the concern mentioned above, because of the political importance of this site in which nuclear facilities are located, there was limited access to materials and professional workforce. This compelled the client to merely use the local materials.

Since according to Nataz city code, just one floor on the top of the pilot level was allowed to build, and pilot level did not have any views over the flat gardens in the southeast, it was decided to leave the pilot level open as much as possible and transfer all functional needs to the first floor. After placing all spaces on one floor, the main challenge was to preserve the view of all spaces.

Design started with separating the public spaces (living room, kitchen) and private spaces (bedrooms, bathrooms) as two independent boxes. The only configuration that would allow all the interior spaces to have a view to the gardens while maintaining their independence was to juxtapose the boxes in an L shape form while having a common ground.

The westward wall that was the only one shared with Public Street was covered with brick texture to both guards the unpleasant western light and maintain the privacy of the property. Large windows from floor to ceiling were placed for the walls which overlooked the gardens including kitchen and living room, the size of these windows were smaller in the bedrooms.

Main materials that are used in this project are traditional brick and granite stones, both of which are local materials of the region. When we used a local material in the construction, the client’s concerns regarding material transportation from the capital to the city of Natanz were alleviated; it also contributed to the local employment in the region and met the client’s limited budget.