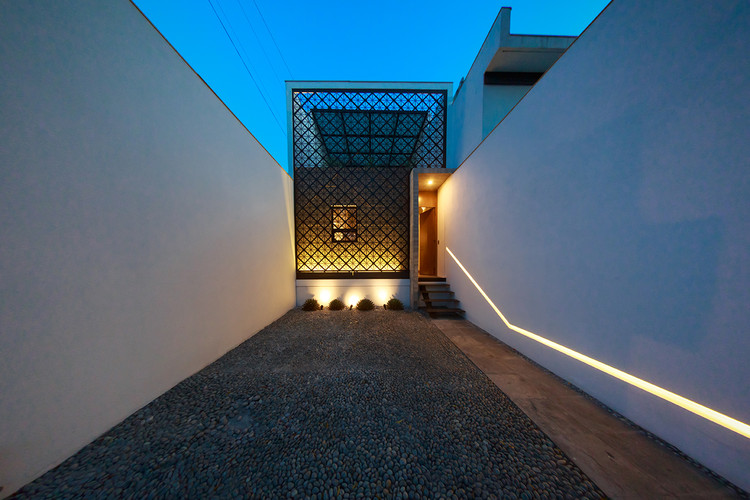 Text description provided by the architects. The concept of design for a project can start from different bases, specifically in this residential project, the conceptual axis emerged as a response to various conditions that the location of the project represented, the first is the size of the property and the second the context.

The property is located in one of the neighborhoods with the largest history within San Pedro Garza Garcia, it could be said that the Colonia del Valle is one of the colonies with which the municipality began to develop, this first factor results in an architectural form in a context of classic style housing. The second factor is the size of the property. Having 4.61 meters in front by 22.77 of length, results in a narrow space, as a consequence, the adjoining constructions hindered the entrance of natural light and ventilation, in addition to lacking attractive views.

In response to the conditions mentioned above, we decided to create a space that would represent the center of the house; a nucleus that became the main axis and where the rest of the areas of the house would turn from this to enjoy it visually and take advantage the virtues that this offers. This nucleus is represented by an inner courtyard that naturally ventilates and illuminates the different areas of the house and at the same time aesthetically becomes a main focal point having a sculptural element that nature gives us as it is the Papelillo tree, that turns the patio into a space not only of transition, but habitable, of contemplation, and rest.

On the facade, a large-scale steel latticework with a regular pattern was designed to create full and empty visual effect and create a pattern of light and shadows. The lattice is accompanied by a concrete wall in natural touch in order to accentuate the beginning and principle of this work.

Since the beginning of this project, we were convinced we wanted to make a home visually connected between all the spaces through transparencies, with the commitment that the user would enjoy the total control of the space and enjoy a spatial sensation of greater scale. Because of this, the interaction was more effective and direct among the users that inhabit the space. It is a house that tells the truth, without losing its functionality.

The materials that were used had to tell the truth by the nature of their properties, beautiful by creation, so that the natural texture of the material was used as a final touch.

In order to foster an intimate relationship with the urban context, we implemented vegetation and some natural materials from the region.