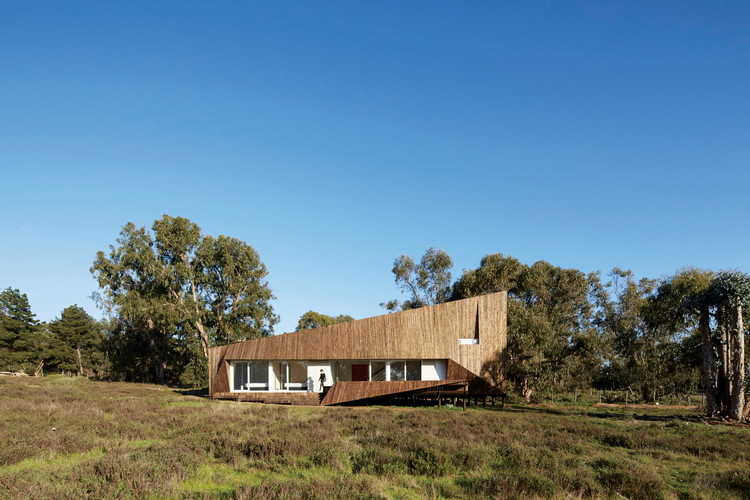 Text description provided by the architects. The Two Skins House is a family beach house located on the coast of Chile, 180 km to the North of Santiago in the Huaquén del Mar condominium. The project deals with the exploration of ruled surface geometries on the house envelope, in order to provide optimal thermal insulation and the incorporation of views towards the Pacific Ocean.

The floor plan consists of a rectangle oriented towards the North, obtaining maximum sun exposure. The house is positioned on an axis that responds to voids in the surrounding forest, which allow for views of the distant ocean. One to the North, allowing all the rooms to enjoy the view, and another to the West, providing the view of the sunset during the Summer season.

The house is built entirely of wood. The first skin of the envelope is made of pine and OSB structure walls, insulated by mineral wool and coated in zinc to seal it from humidity. The second skin generates a ventilated façade. This, combined with a cross-ventilation system throughout the volume, allows the house to remain very cool in the seasons of heat. The second skin is the visible face of the house, and proposes a dynamic aesthetic of gradual variation, through the interpolation of wooden elements, resulting in a warped surface, both in the longitudinal facades and on the roof.

The operation is similar to the South and North facades, where an eave is generated over the windows and doors, and the envelope is folded until reaching the lead of the eave, returning to the original lead gradually, by means of a fold in the opposite direction at the bottom of it. It was intended to work with a simple volume, without convexities, and to give it expression through the double curvatures of its envelope. Those are perceived subtly in the interior of the house and become more expressive from a distance.

The house is nine meters high at its tallest point, just above the master bedroom, on the second floor, and four meters at the lowest point. At the North-South axes of each of these points, lines of opposite slopes are constructed, and through their interpolation, they form a hyperbolic paraboloid on the roof. The finish of the house is made of impregnated pine dyed dark brown, which integrates with the colors of the environment, in a dialogue with the landscape. 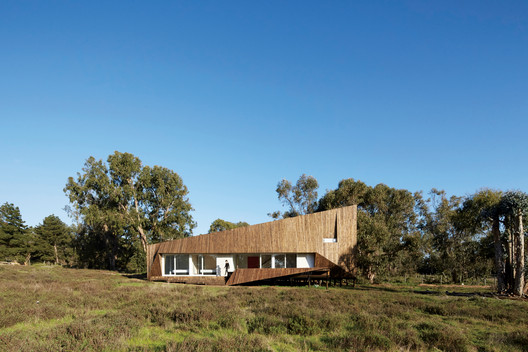