Nieto Sobejano Arquitectos has revealed the design of Montblanc Haus, a new museum, visitor center and event space in Hamburg, Germany dedicated to the "art of writing" and the finely-detailed craftsmanship of Montblanc products. The
Spanish firm was selected as the winner of an international competition ahead of top teams including Snohetta (Norway), John Pawson (UK), wHY (USA) and Noé Duchaufour (France).

At the announcement, Hamburg Mayor Olaf Scholz and Montblanc CEO Nicolas Baretzki unveiled the design of the 39,395-square-foot (3,660-square-meter) project for the first time, presenting it as a new architectural icon for the city. Estimated to cost 20 million euros, the museum will tell the story of Montblanc through the company's iconic writing utensils and products.

The design of Montblanc Haus is formed by a 100-meter-long volume reminiscent of a pen case that conceals "a sophisticated sequence of spaces in three levels, articulated around a central illuminated atrium." A signature element of the project is the graphic facade. The architects explain:

The main facade transmits the new image of the factory to the exterior of the building, and represents the values that define the Montblanc brand: simplicity, sensuality and timelessness, by means of a textured concrete enclosure or screen that can be used for dynamic projections on a relief evoking the mountain range from which the company takes its name.

To be located in the Altona district in Hamburg, Montblanc Haus is expected to open to the public in 2020. 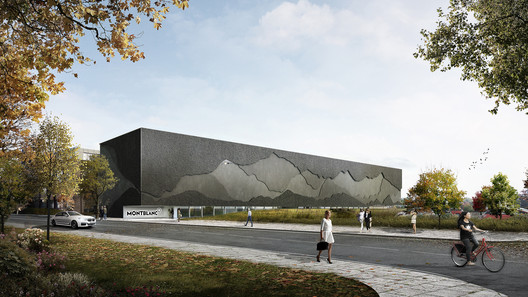