The 65-story, winding glass skyscraper designed by BIG for New York’s Hudson Yards neighborhood, "The Spiral," is one step closer to realization, as developer Tishman Speyer has secured the necessary air rights for the structure, The Real Deal reports.

The $157 million deal was made between the developer and the Hudson Yards Infrastructure Corporation and the Metropolitan Transportation Authority for 669,000 square feet of development rights, equalling $235 per square foot. After adding in the square footage acquired in two separate deals in 2015 and last year, Tishman Speyer has now spent $265 million to gain more than 1.23 million additional square feet of buildable space for the 1,005-foot-tall tower.

But that amount is still just a fraction the estimated $3.2 billion price tag for the building, which will house 2.85 million square feet of primarily office space. Earlier this summer, pharmaceutical company Pfizer announced it would sign on as the building’s anchor tenant with a 800,000-square-foot lease.

News via The Real Deal.

Developer Tishman Speyer has commissioned BIG to design a new office tower on the northern end of the High Line at Hudson Yards in New York City. Dubbed " The Spiral," the 1005-foot-tall tower is named after its defining feature - an "ascending ribbon of lively green spaces" that extend the High Line "to the sky," says Bjarke Ingels. 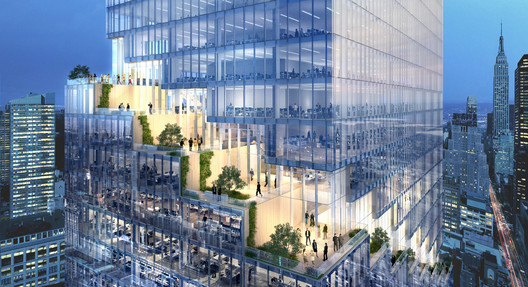