For the first time in more than 40 years, visitors will be able to access the uppermost levels of Italy’s most popular historical site, the Colosseum, following the completion of a major restoration project.

Beginning November 1st, guided tours will take ticketed guests to the remaining sections of the fourth and fifth levels of the stadium, rising as high as 120 feet above ground level.

Much like today’s stadiums, stadium hierarchy was determined by wealth and social class: the emperor would sit in a special box, senators on marble benches near the pitch, knights on the intermediate levels, and merchants and traders on the fourth level. The fifth level was typically filled with common folk – the plebeians – who would sit or stand on wooden benches to watch the battles below. Total stadium capacity was estimated between 50,000 and 80,000 people.

“It’s not been possible to visit this part of the Colosseum for 40 years,” commented Culture Minister Dario Franceschini. “This restores another part of the monument to the public and provides incredible views of not only the Colosseum but also Rome.”

News via The Telegraph, USA Today.

NewsArchitecture NewsRomeItalyColosseum
Cite: Patrick Lynch. "The Colosseum's Highest Levels to Open to the Public for the First Time in Decades" 05 Oct 2017. ArchDaily. Accessed . <https://www.archdaily.com/881069/the-colosseums-highest-levels-to-open-to-the-public-for-the-first-time-in-decades> ISSN 0719-8884
Save 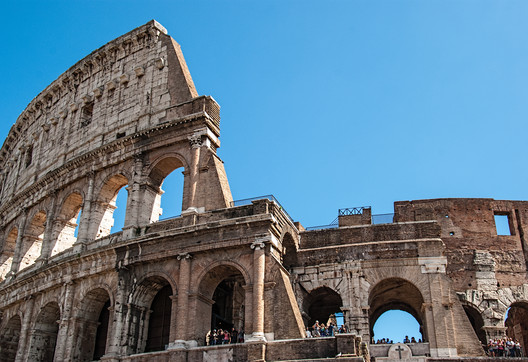