3XN Architects has revealed new renderings and photographs of the in-progress headquarters for the International Olympic Committee in Lausanne, Switzerland. Selected as the winner of an international competition in 2014, the design features sinuously curving forms evocative of the “movement of an Olympic athlete” to embody the three core principles of movement, flexibility and sustainability. 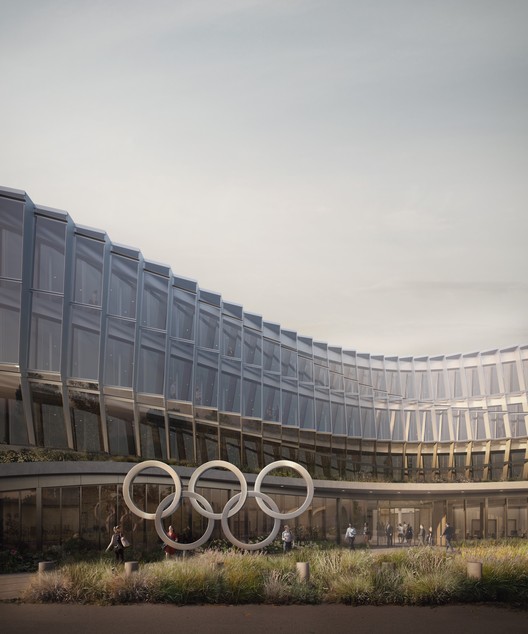 Now above ground, many of the building’s signature features are now coming together, including the central ring-shaped stairway and atrium, and the distinct faceted glazed facade, which allows natural light to penetrate deep into the optimally-sized floor plates. A cavity between facade layers reduced noise from a nearby highway, while an inner sunscreen helps to filter light coming in, allowing the outer layer to retain its fully transparent appearance.

"With its dynamic, undulating façade, the building will appear different from all angles and convey the energy of an athlete in motion,” Jan Ammundsen, Senior Partner and Head of Design at 3XN Architects. “Its interior is designed with as few structural constraints as possible. This open and flexible environment is meant to adapt for multiple work styles now and in the future."

The building is also striving for high-performance energy efficiency and sustainability. Rooftop solar panels will provide enough power for the office to be entirely self-sufficient, while concrete salvaged from the former IOC headquarters is being recycled on site for use in the foundation and outer walls. Sustainable fixtures, a green roof, several terraces and a fitness center will also encourage employees to reduce their impact and energize themselves throughout the day.

The new headquarters will house approximately 600 IOC employees currently working in separate offices across Lausanne. Construction is expected to complete in early 2019.

3XN and the International Olympic Committee (IOC) have released images of a new headquarters planned for a 24,000-square-meter site on banks of Lake Geneva in the Swiss city of Lausanne.