A Hall for Hull with "Trois Points de Vue" by Chilean practice Pezo von Ellrichshausen and Swiss artist Felice Varini has been unveiled in the British city of Hull. Jointly commissioned by the Royal Institute of British Architects (RIBA) and Hull UK City of Culture 2017, the "monumental" outdoor installation has "transformed" Trinity Square [Hull] with sixteen galvanized-steel columns, arranged in a grid formation in front of Hull Minster, to form a new civic room for the city. 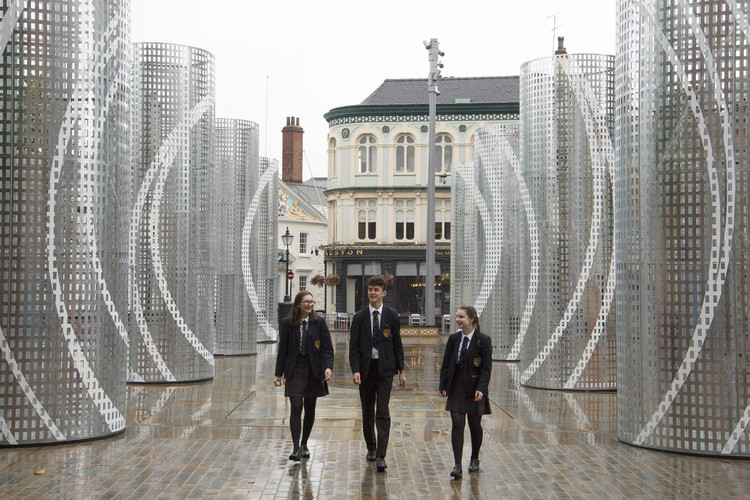 According to the RIBA, the installation will "provide visitors with a range of different experiences as they enter each of the six-meter-high columns," which are open to the sky. "Perforations across the columns’ frosted-like steel skin creates a delicate interplay of light and shadow across the interiors of each inhabited space."

Visual and physical contradictions merge as visitors first encounter a series of imposing, static steel columns from a distance but as they move closer the perforations create as feeling of lightness.

Mauricio Pezo and Sofia von Ellrichshausen said: “This installation forms a temporary hypostyle room without a roof, with massive but almost immaterial columns barely open to the sky and to the immediate surroundings. The empty stone-paved square is challenged by the size and disposition of a regular open grid and each column (two meters wide and six meters high) is in fact an inhabitable room with a single entrance pointed to a different direction."

The silent vibration of glimmering lights and shadows, together with the very indifference of the grid, is altered by three delicate motives drawn in the air by Swiss artist Felice Varini, which can only be seen towards precise vanishing points. 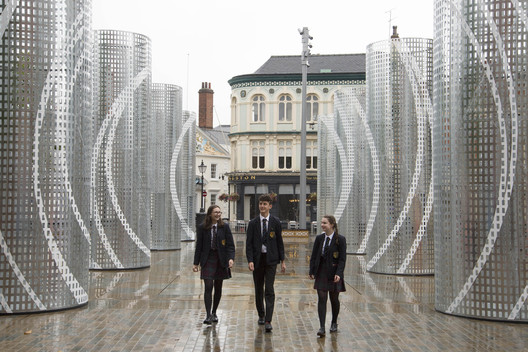