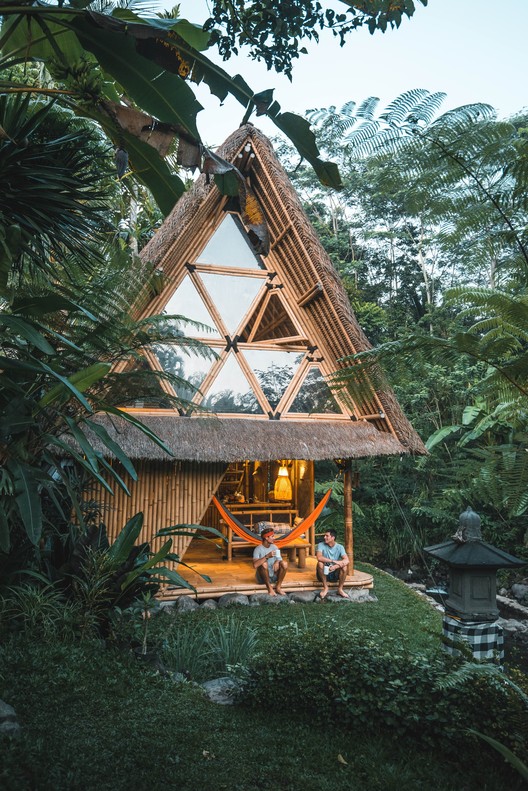 Text description provided by the architects. Hideout project started in 2014 by developing a simple bamboo structure for a small bamboo house. Set on a river bank, the house offers a spectacular view of the lush jungle forest surrounding the house. The last couple of years did bring a lot of attention to bamboo as a sustainable and versatile building material here in Indonesia. Also thanks to the inspiring job of John Hardy and his family here in Bali.

In 2014 we saw and felt the contrast of bamboo being fast growing and easily accessible material that is native to Bali but manifesting so far only either as the low-quality material for cow sheds or as a luxurious material at few expensive accommodations. That is why Hideout project represents an idea something unique and accessible for all, who want to experience a night in a bamboo house.

All bamboo used during this project was harvested in local villages, reducing footprints of the construction. Bamboo from local mountains in Karangasem can be considered one of the best in Bali. Grown approximately 800m above the sea level, the sugar levels in the bamboo flesh are lower, they have great density, durability and tend to be more resilient to termites. Treatment is the key to success, we decided on a combination of natural treatment by smoke and non-toxic products.

The first house, called Hideout Bali, is built in a classic way with a saddle roof and a lot of open space. It is an all-bamboo construction with six main pillars and a thatched roof. The A-shaped roof provided a perfect opportunity for triangular windows, which are the most prominent design of the building. Benefiting from the tropical weather, house extends with beautiful outside shower, set under the trees in the garden. Wherever it was possible, trees serve their purpose in the house or in the garden, which almost gives you a feeling of living in a treehouse.

Note: This project was originally published in 21 September, 2017