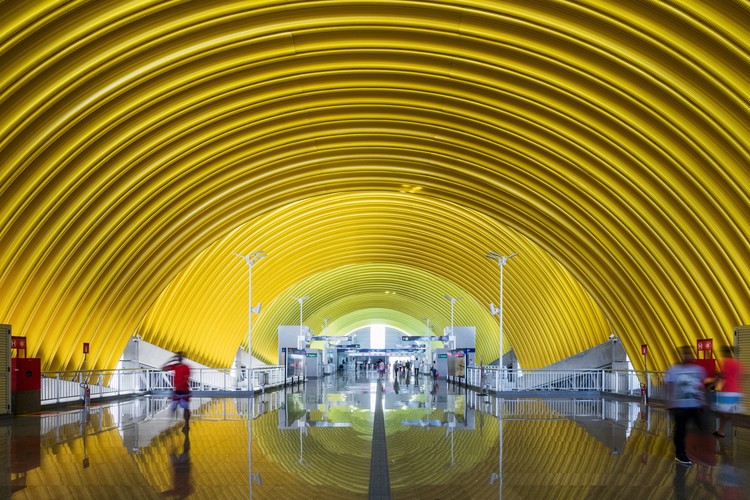 Text description provided by the architects. Salvador, the first capital of Brazil, had its urban layout on a specific geography, formed by hills and valleys (high and low city). This model of occupation was intensified after the 60s of the 20th century where, on the hills, occupation was residential, while the valleys had priority as a road transportation vector, leading to an unsustainable traffic congestion.

The landscape resulting from this model is generally characterized by low occupancy density and wide range of horizons. This promotes considerable distances between the passenger catchment point and the stations. In this context, the stations are viewed at great distances, demanding a strong presence in the landscape, as a way of orientation, identification and attractiveness for users.

The city of Salvador is heir to a specific and rich cultural condition, largely substantiated by the African and Portuguese heritage, present in all aspects of the life in the city. In this context, the settlement of the subway system must recognize this heritage, establishing legitimacy and cultural insertion in a contemporary way, and avoid repeating stereotypes.

Line 2 - Integrating is transforming The project, of great dimension and under public concession and private operation, encompasses a total of 12 metro stations, 9 typical above ground stations, 1 elevated station, 2 above ground stations under specific project conditions (including a large retrofit), 3 bus terminals, 13 kilometers of landscaped treatment with linear parks and bike path.

Line 2, located in the central separator of Paralela, an avenue with approximate extension of 13 km and responsible for the connection of the very dense central area in the city of Salvador, between the Central Bus Station and the Airport.

Each station was developed under different conditions of settlement, morphology, demand and modal interaction, requiring the consideration of specific conditions, simultaneously with the search for a general unity for the system. The stations: a comfortable, fast building and low budget icon for Salvador

The typical stations were developed on two floors, being the platforms located close to the surface and the mezzanine located on its upper deck. The use of sustainable, rationalized and prefabricated construction systems to meet the short construction schedule has made the architectural project strongly aligned with engineering decisions in the design of its constituent elements. The station’s pillars, girders and slabs were designed in pre-cast concrete because of high repeatability of its parts. The pillars were designed in such a way as to give continuity to the design of the self-supporting tiles curvature, providing a reduction of the built volume, since the stations would also be implanted in a small area between high-density road, allowing, close to their base, where there was minimum right foot, were occupied by public walkways, emergency escape route or bicycle lane.

The covering system, with span of approximately 23 meters, is in self-supporting metal tile, double with thermal and acoustic protection and formatted in the construction site. The walkways and the closures are in metal structure. It was intentional to create solutions for the station's construction systems in order to potentiate them in an original aesthetic-spatial result. Tilted 10 degrees from the horizontal plane, the self-supporting steel roof sections ("ceiling-floor" type) provided visual contact with the exterior and contributed to natural lighting and ventilation, forming a sequence of vaulted sheds. Being Salvador a city with a tropical climate, with high solar incidence, the design of the stations was based on large shaded areas with abundance of cross ventilation and chimney ventilation contributing positively to the thermal comfort of the users. This solution presents a dynamic and unusual spatial aspect in the interior of the station, caused by its shape, scale and colours. 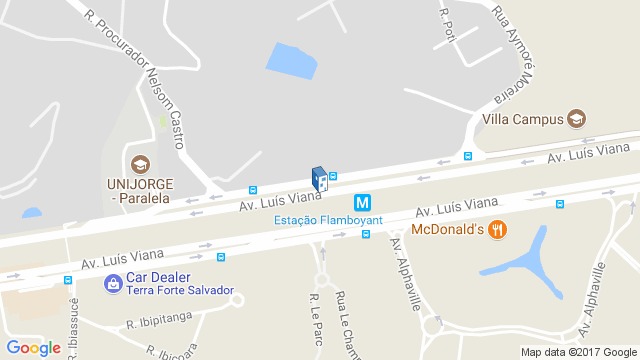 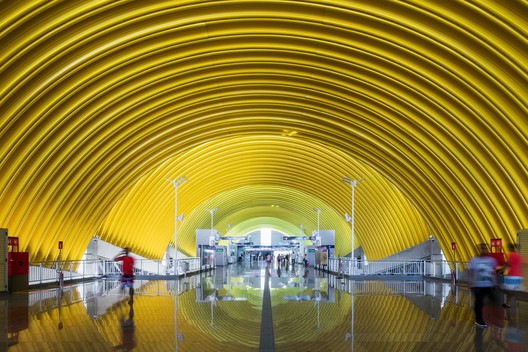