Save
What Do The Cracks in Concrete Structures Mean?

Cracks, which could be classified according to their thickness as fissures or fractures, are serious problems in the construction industry that can negatively affect aesthetics, durability and, most importantly, the structural characteristics of a project. They can happen anywhere, but occur especially in walls, beams, columns, and slabs, and usually, are caused by strains not considered in the design.

Fractures are usually of lesser severity. In general, they appear more on the surface of the structure. They are narrow and elongated, with openings less than 0.5mm. Sometimes they are not even visible to the naked eye. Generally, they do not imply structural problems but can lead to more serious consequences. It is important to note if the fracture grows over time or remains stable, because it may be the first stage of a fissure.

If not looked after, the next stage or a fracture could lead to deeper openings of 0.5 to 1.5mm. They can be seen without difficulty and are much more dangerous than the fractures because the rupture of the structural element has already occurred and can affect the safety of the part.

Fissures are slits with openings greater than 1.5mm, deep and well highlighted. With this magnitude, it allows air and water to penetrate the interior of the part, which requires immediate attention. They may cause corrosion of the armature or undesired chemical reactions in the material. One should not simply close them without researching the causes and provide the solution to the problem that caused it.

The main reasons that may be related to the occurrence of these cracks are the following:

See below some of the causes for cracking:

Cracks on beam due to insufficient positive reinforcement

Cracks on beam due to insufficient negative reinforcement

Cracks on beam due to shear

Cracks on beam due to retraction of concrete

Cracks on the pillar due to repression at the foundation

Cracks on the pillar due to insufficiency of stirrups

Cracks on slabs due to insufficient positive reinforcement

Cracks on slabs due to excessive overload

Cracks on the corner of windows and doors

Cracks on masonry of facades

It can be said that when observing the appearance of cracks in structural elements such as pillars, beams or slabs or even in walls, it is necessary to communicate the problem to the calculating engineer or, if it is not possible, to call another qualified professional, in order to establish an accurate diagnosis and to determine the alternatives for correcting the defect in order to provide the necessary repairs. 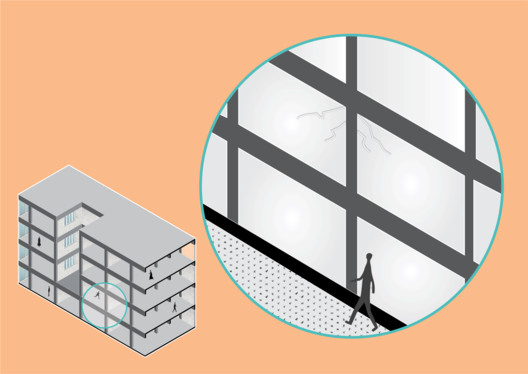