The history of humans building shelters goes back over 10,000 years. Over this time, the human need to build was distilled into the profession of architecture, and in the process it attracted all manner of eccentric, visionary, and stubborn individuals. In light of both architecture's long history and its abundance of colorful characters, it's no surprise that it's full of surprising and unlikely stories. From Lincoln Logs and the Olympics to Ouija boards and 9/11, here are 13 architecture-related facts you may not have previously known.

1. Architecture Was Once an Olympic Sport

During the first four decades of the modern Olympic Games, 151 medals were awarded for music, painting, sculpture, literature, and architecture. Baron Pierre de Coubertin, who revived the modern games and founded the International Olympic Committee, considered art an essential part of the competition. The one caveat: every submission had to be sports-related.

Not all iconic Lloyd Wright designs can be attributed to Frank. Lincoln Logs were the brainchild of John Lloyd Wright, son of the legendary architect. An architect in his own right, John was inspired by the interlocking beams of the foundation below Lloyd Wright Senior's Imperial Hotel in Tokyo.

3. Girih Tiles, Used By Islamic Architects for Hundreds of Years, Are Mathematically Similar to Penrose Tiling, Discovered in the 1970s

Penrose tiling was named after mathematician and physicist Sir Roger Penrose, who experimented with a set of five differently shaped tiles in the 1970s to create patterns with special geometric properties. Islamic architects created Girih tiles over five centuries ago, but it wasn't until 2007 that physicists Peter J. Lu and Paul J. Steinhardt demonstrated they share many mathematical properties with Penrose tiling.

When Godtfred Kirk Christiansen, son of the LEGO founder, tried to make a Lego model of the house he was building, it didn’t come out to scale, because Lego bricks have a 5:6 width-to-height ratio. This led to the creation of Modulex, a much smaller brick that was based on perfect cubes, in 1963. Unfortunately, the bricks were discontinued in the 1970s.

5. Maya Lin Is the Niece of One of the Most Famous Female Architects in Modern Chinese History

Lin Huiyin is considered the first female architect in modern China. Alongside her husband, Liang Sicheng, she helped launch the architecture department at Northeastern University in Shenyang. Maya Lin, who designed the Vietnam Veterans Memorial in Washington DC, is Huiyin's niece.

6. The Cooper Union Foundation Building in NYC Included an Elevator Shaft, Even Though Modern Elevators Hadn't Been Invented Yet

Elisha Otis first demonstrated his safety elevator in 1852 in London, and installed the first successful passenger elevator in the 5-story E V Haughwout Building in 1857. However, neither of these developments included a modern shaft; they were left open in case of failure. Putting his faith in elevator technology, in 1859 Peter Cooper had a cylindrical shaft included in the Cooper Union Foundation Building, with a custom-made elevator later added by Otis.

7. A French Postman Spent 33 Years Building the "Ideal Palace" With Stones He Collected During His Daily Round

French postman Ferdinand Cheval spent 33 years picking up stones while delivering mail—not just any stones, mind you, a special type of hardened sandstone molded by time and water into wondrous shapes. With these stones he built the fantastical Le Palais Idéal, in Hauterives. The building is considered a prime example of naïve art, and in 1969 was designated a cultural landmark.

8. "The Sims" Was Originally Designed as an Architecture Simulator

The Sims, which debuted in 2000, is one of the most popular video games around. But before it became a life simulator, the original concept had the game working more like SimCity: players would design a house, and autonomous characters would test the design's success.

9. The Empire State Building Generates More Revenue from its Observation Decks than from its 85 Floors of Office Space

The Empire State Building might be the most famous office landlord in the world, but it's the view from the 102-story skyscraper that's the real moneymaker. In 2013, the building's owner Empire State Realty Trust became a publicly-traded company, meaning that their quarterly and yearly earnings reports are a matter of public record. In 2014, while the building's two observation decks generated $111 million (40% of total revenue), its office space leases netted just $104 million (37% of total revenue).

10. One of the Leaders of the 9/11 World Trade Center Attack Was an Architect

Mohammed Atta, who crashed the first plane into the North Tower of the World Trade Center, had degrees in architecture and urban planning. He considered the construction of high-rises in Cairo and other ancient Middle Eastern cities a shameless embrace of the West that would destroy their character.

11. The City of Cincinnati, Ohio Has an Abandoned Subway System Which Was Never Used

Hidden beneath the streets of Cincinnati is the largest abandoned tangle of tunnels and stations in the United States. Proposed in the 1910s as an upgrade of the city's streetcar system, the project was interrupted by World War I and later abandoned because of inflation and political infighting.

12. The Supervisor of the Ouija Board Company Fell to His Death From the Roof of a Factory that the Board Told Him to Build

While many designs for Ouija-style boards emerged in the 19th century, the most popular design, and the name, was patented by Kennard Novelty Company. The company's supervisor William Fuld made his fortune selling the boards, and opened up a number of new factories; in 1927 one of these factories, which Fuld claimed the board told him to build, was the scene of the business magnate's death when he fell from its roof.

The idea of a single, unified wall to protect China from invaders began when Qin Shi Huang, the first Emperor of China (221–206 BC) connected various fortifications built between the 8th and 3rd centuries. Construction continued through 1878, meaning that, including the original fortifications, the wall was under construction for over 2,600 years. 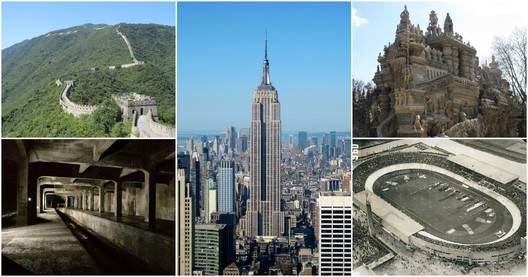