Save
House for a Drummer / Bornstein Lyckefors 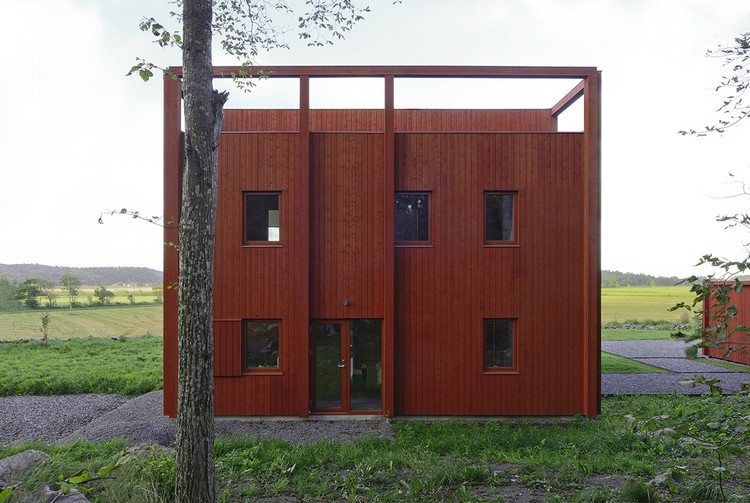 Text description provided by the architects. House for a drummer is built for a single father of two with great interests in music, sailing and nature. The house is located half an hour north of Gothenburg on the Swedish west coast at the edge of a vast farmland.

The context has some very specific historic legacy as an old farm stall and warehouse used to rest on the site. It burned down some generations ago and was never rebuilt but has influenced the design. The new house is a straightforward warehouse inspired volume with a distinct framing and with large barnyard doors covering the windows facing west, all painted in traditional Swedish Falu-Red colour.

The client, a single father of two, wanted an open and social two-story house. He wanted a house that could blend in and become a part of the site and its surroundings but also had a spatial richness of its own.

The bearing concept of the design is an open section through the house. Just like the open plan it allows the rooms to intertwine between the two floors.

The ground floor has a concrete floor that seamlessly continuous on the outside while the other floors have varying heights and formats.

Without losing living space the floor slab is displaced vertically to create contact between the floors and allow light to spread deeply down the diagonal through the house.

In addition to the entrance hall, WC, kitchen and living room, the ground floor also includes a passageway with a niche designed as a daybed. The space works as a cubbyhole for the children or as an additional more secluded reading and relaxing area that is separated from the open and integrated living room.

In the living room there is a place-built bookshelf in plywood with the house's workplace. Plywood is on of two materials that define the house. The ceiling, the parts with exposed beams, place-built furniture, some walls and the stairs are all made out of wood. The other surfaces and the entire kitchen is decorated with a dark grey wooden fibreboard (Valchromat).

A staircase from the kitchen reaches the second floor. A tall vertically oriented room redirects the spatial flow to the upper part of the living room and to a balcony overlooking the west. The upward spiral finally ends in the master bedroom that virtually hoovers over the living room. 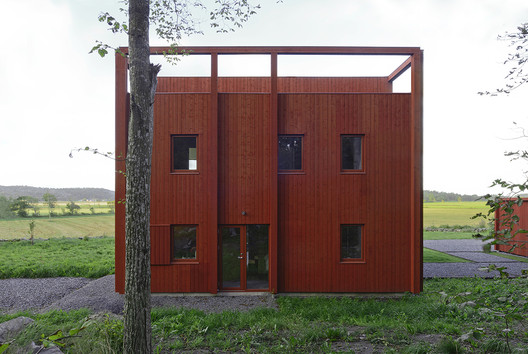