The Guinness Book of World Records has crowned a new world champion sandcastle in a surprising location: the landlocked city of Duisburg, Germany.

Rising 55 feet (16.68 meters) into the sky, the sandscraper is formed from more than 3,860 tons of sand sculptured by a team of designers from 10 countries over a three week period. Stylized as a magnificent medieval city, the design also incorporates familiar structures from around the world, including an appropriately leaning scale version of the Leaning Tower of Pisa.

This was the second year in a row the city attempted to claim the title of world’s largest sandcastle. Last year, the structure suffered a significant collapse and was disqualified for using materials other than just sand and water. This year, the sculptors used a different variety of sand, composed largely of a very fine quartz measuring less than one millimeter per grain. The attempt hit a snag once again with a minor collapse mid-way through construction, but the designers were able to adapt their design on the fly to reach the final mark.

The Duisburg castle takes over the title from a 50-foot-tall structure completed just this past February in Puri, India.

The sandcastle is planned to remain on view through September 29th.

"I always had an affinity for architecture which I attribute to growing up in a neighborhood and town that was constantly under construction. Our house was the first on the block. I think that in a way I was more interested in the abstractness of the foundations and the initial framing then in the completed structures themselves. 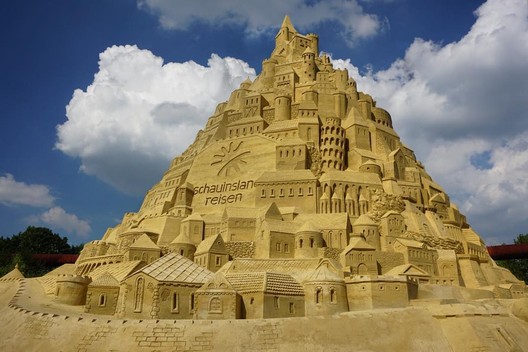