Save
House in Chau Doc / NISHIZAWAARCHITECTS 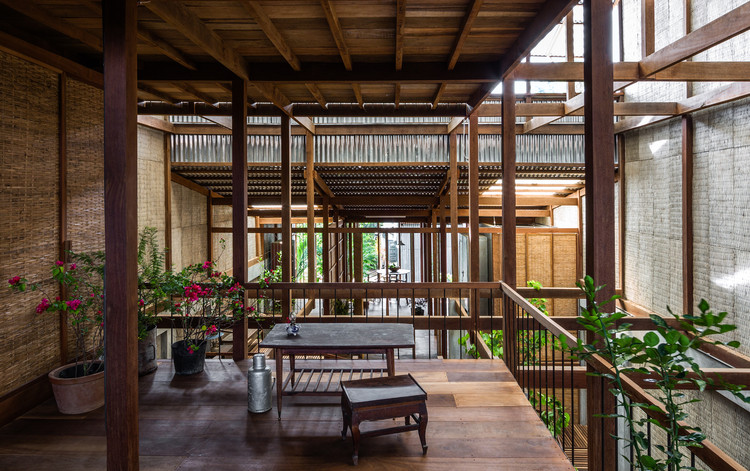 Text description provided by the architects. Located in a suburb of ChauDoc town in AnGiang province, Southern Vietnam, this house is a sharing residence of 3 nuclear families who are kin. Although this project budget was tightened with local standards, which only allowed us to build a house with thin corrugated metal panels, we have tried to satisfy not only the regional spirits but also the rich lifestyle in which is fulfilled by sunlight, greenery and natural ventilation, as it were, living in a half-outdoor gardens.

Around 7 hours travelling from HoChiMinh city by long-distance bus and ferry, ChauDoc, a border town closed to Cambodian boundary, has been developed along a branch of Mekong River. Wandering around the neighboring site, what we could easily recognize is the several layers of the regional environment. The first layer is depicted by hundreds of floating houses on the river, and secondly, there are embanked roads along two sides of the river banks which turn into the main traffic for the local society, while the third layer is scattered with a plenty of pilotis houses extended from the roads by private small bridges, and the last one is painted in green by beautiful rice-field as far as our eyes could reach. Generally, pilotis houses in this area are mostly composed of stone or concrete columns on the ground and floating timber frames wrapped by thin corrugated metal panels. Due to the height limitation of the column which only can lift the house over flood water and also due to the minimum dimensions of timber frames for the local daily floor-sitting lifestyle, we could feel about the human-scaled and gentle impression from these local houses. And the more deeply we approached into their living context, the better we could understand about the harsh natural environment that they have to cope with, when all the grounds except the embanked roads used to be under the water during 4-5 months in the rainy season annually till they have completed the concrete embankments very recently. Anyone who visit this area could recognize the scent of their intelligence about how to co-exist with the large-scaled Mother Nature for such a long time.

On the other hand, ironically, we have found that their daily-life has become unstable and un-organized especially after the recent drastic changes when they compulsively eliminated floods which had given a lot of inconveniences to them. An apparent evidence is that almost all the inhabitants have abandoned their ground level with their no-use garbage or excreta from their domestic animals such as pigs, gooses and chickens. This fact could drive their living environment into bad condition since those houses have too low ceilings without insulations and too small windows for ventilations. Formerly, flood in the rainy-season would wash away all excreta accumulated in the dry-season, and the covering water would be helpful to lower the surrounding temperature as well.

Based on these conditions mentioned above, what we aimed is to adopt regional customs such as local materials, carpenters’ techniques and their construction methods as much as possible except 3 new architectural intentions below.

1/ To invert the roof shape from ordinal-roof into butterfly-roof in order to open the interior space to surrounding environment, and then cover all the site by 3 butterfly-roofs in different heights.

2/ To hang up rotating metal windows from end to end at the big openings between each roofs and façades to adjust the amount of sunlight and natural wind.

3/ To replace all the internal solid walls into movable partitions to create one big continuous space.

These 3 architectural principles are clearly intended to realize a half-outdoor and contemporary spaces with full of natural elements such as sunlight, wind, water, soil and plantings. However, at the same time, it is also an important theme for us to preserve the regional customs and spirits inside the house which can be listed as floor-sitting lifestyle, human-scaled dimensions and floating timber frames on the concrete columns. This theme is also consistent with its exterior design, which is to blend with the surrounding environment but to outstand by modern design languages.

Nowadays in Vietnam, urban and stateless housing style starts spreading even into the rural areas and changing their unique cultures, landscapes and lifestyles of their own regions. (In fact, 5 story building is under construction on the adjacent plot). It would be one of emergent subjects for us, Vietnamese architects, to propose alternative and contemporary way of living by inheriting their cultures, not by fading out their regional spirits. 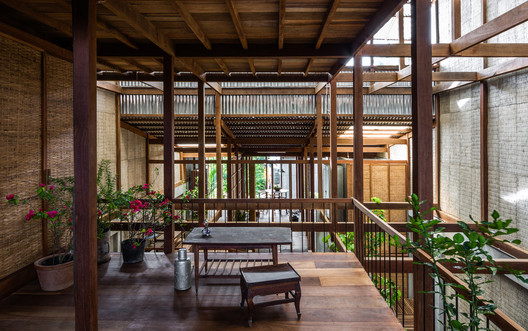