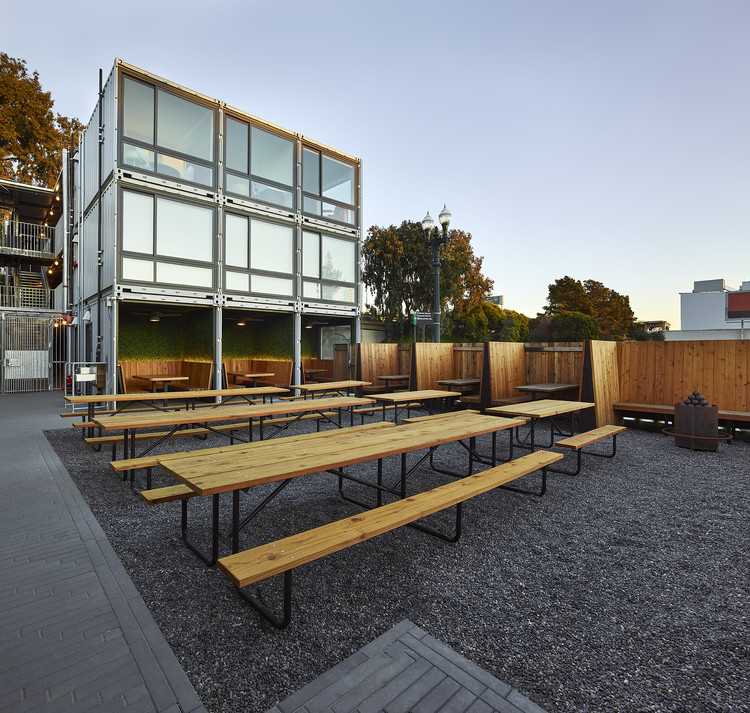 Text description provided by the architects. In the spirit of Archigram and Superstudio, the project has its roots in adaptable, robotic structures which have the potential to roam and adapt themselves to the urban landscape. Plug-In City and Continuous Monument were among the first to suggest that architecture could be playful, and that architecture did not always need architects. We borrowed from these notions in robotic investigations which allowed us to study how architecture might be modified over time, and in varied spatial circumstances.

This project carries these earlier precedents and projects in its DNA. It is sited adjacent to the freeway, and near a mass transit station. It consists of an existing structure and 33 used shipping containers. The containers are ready-mades in the Duchampian sense, as a product of industry or culture which can be put into play. The ultimate configuration can be adapted to the concerns of the developer, neighbors, city officials, and inhabitants.

Operationally, the site is a node in the rapid transit network, but is also related to the network of shipping containers in constant movement around the port of Oakland. The containers become not just a readily available building material, but a ready-made component that is then assembled with subsequent modules to build a larger system.

The completed system is formed through adaptation to various contextual conditions, responding to topography, existing structures, sound, light and shadow, air, views, circulation, program and economy. The resulting configuration of stacked containers, arranged according to inputs, becomes an open framework from which a community can grow.

The underlying components create a canvas, while the community has populated the project with their own modifications according to their own needs. Members include a record shop, gallery, skateboard artist, shoe / clothing and jewellery makers, acupuncturist, interior designer / tarot card reader, and restaurantuers.

The results are dramatically different from container to container. The lack of top down design direction engenders a rich and sometimes messy texture, but in the end, is a vibrant place to live and work. The architecture becomes the backdrop to interactions, conversations, events, and the evolution of creative.

The project is adjacent to Bay Area Rapid Transit (BART), a bay wide metro rail system. Auto parking was omitted in favor of bicycle parking. Most tenants and customers take transit, ride bikes or walk to the project. The site is centrally located in Oakland’s Longfellow neighborhood, which contains numerous small businesses and restaurants that serve the high density neighborhood.

Due to the proximity of the Port of Oakland, shipping containers are readily available. The project consists of 33 previously used containers; structure, walls and floors remain intact. The shell of the container is modified for openings which provide views, light, and cross-ventilation, taking advantage of a moderate east bay micro-climate. The container structure allows for large openings, and units face south and west to maximize daylight. Glass is treated to minimize heat gain.

The formerly vacant existing structure on the site, a single story, wood framed, retail storefront, was reused for the coffee shop and restaurant.

The project provides a unique financial stability to small, local businesses. A container provides a space between a shared workplace, and a large, high-rent, single tenant office space. The small units provide for an economic system that did not exist previously. 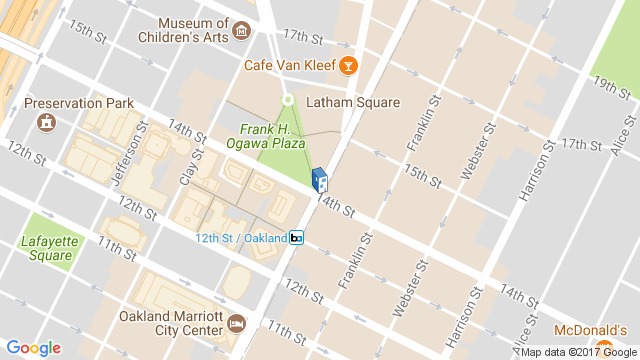 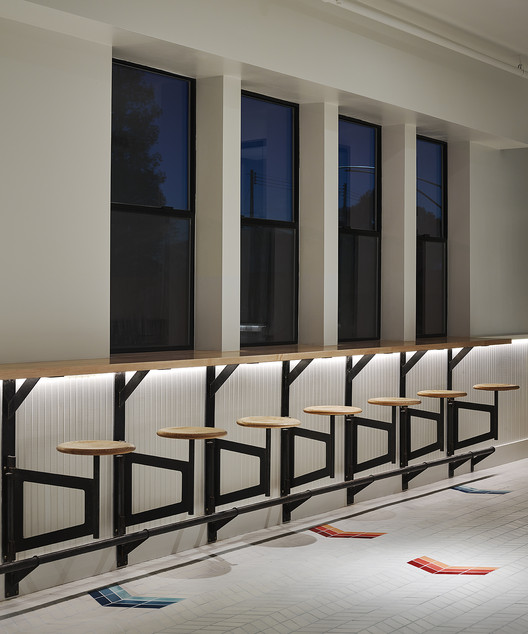