Last time we checked in on the progress of the upcoming BIG-designed LEGO House experience center in Billund, Denmark, the structure had just topped out, with all of the major structural elements in place. Now, in drone footage released earlier this summer by LEGO, many of the building’s final finishes, surfaces, and colors can be seen as it prepares for its grand opening next month.

The drone footage captures the 21 LEGO brick-proportioned masses that make up the building in their full glory, including the rainbow of colors that make up the outer membrane of the building’s flat roof system. These colors also indicate what type of program lies within, organized around the different aspects of a child’s learning: the red indicates spaces that stimulate creativity; blue, cognitive skills; green, social; and yellow, emotional.

The building has already been tried out by the families of employees on a special test day, but the building will officially open to the public on September 28th.

Learn more about the project in our previous coverage, here. 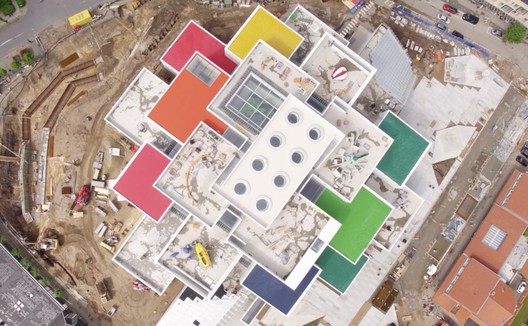