Save
The Power of Architectural Drawing: The Sketches That Saved St. Mark's
Share
Or
Copy

This short essay, written by the author and critic Jonathan Glancey, coincides with the launch of the inaugural Architecture Drawing Prize – a competition curated by the World Architecture Festival, the Sir John Soane's Museum, and Make. The deadline for the award is the 18th September 2017 and successful entries will be exhibited in both London and Berlin.

For John Ruskin, Venetian Gothic design in the guise of polychromatic gasworks in Brentford, ornate factory chimneys in Croydon, glistering gin palaces in Bloomsbury and even the well-meaning Reform Club in Manchester was nothing short of anathema. Even at their risible best, these flamboyant Victorian buildings were idle travesties of the influential 19th Century critic’s beloved Ca’ d’Oro and Palazzo Ducale adorning the Grand Canal.

Ruskin’s problem was that he was all too influential. His passion for Venice encouraged enthusiastic young British architects to adopt Venetian Gothic for buildings of a very different era than that of the late medieval and early Renaissance heyday of “La Serenissima” and under the cloudy auspices of a wholly different climate.

His compelling books—The Seven Lamps of Architecture (1849) and the three volumes of The Stones of Venice (1851-53)—led the Gothic Revival into a bizarre aesthetic blind alley. This was not Ruskin’s fault, although when you read him on Venice and look at his drawings of the city’s animated architecture, it is easy to understand why Venetian Gothic became fashionable a century and a half ago.

Ruskin made eleven long trips to Venice, the first in 1835 when he was sixteen, the last in 1878 by which time he was on the edge of the breakdown that led to the silence of his last decade staring over the elemental wilds of Coniston Water rather than the exquisite artifice of the Grand Canal.

From precise, if skeletal teenage drawings of the Doge’s Palace to emotional chiaroscuro pencil and charcoal sketches and Turneresque watercolours capturing the detail while evoking the emotions of Venetian Gothic design, Ruskin’s understanding of the city he adored matured with each visit. If, though, they seduced the eyes of young British architects working on the designs of carpet factories in Glasgow and tea rooms in Sunderland, they also encouraged Venetians themselves to take stock of the weathered beauty of their peerless architectural heritage. It was Ruskin’s eye, his powers of argument and superb drawings that led Venetians away from the idea of renovating St Mark’s so that it would look brand new towards a subtle restoration retaining the patina of past ages of craftsmanship, use and care.

What Ruskin could never have dreamed of was the fact that his writings inspired by Venice and his drawings of Venetian architecture would help spark an intellectual and aesthetic revolution a quarter of a century after his death. When Le Corbusier wrote, “Architecture is the learned game, correct and magnificent, of forms assembled in the light”, he was echoing Ruskin. “I do not believe that ever any building was truly great, unless it had mighty masses, vigorous and deep, of shadow mingled with its surface”. He was thinking of Venice. This is what he drew. The power of his Venetian drawings might have prompted ornate factory chimneys in Croydon, yet they also led to the pilgrimage chapel of Ronchamp with all its play of light, shadow and craft, its sense of Ruskinian moral purpose.

The inaugural Architecture Drawing Prize is accepting entries until the 18th September, 2017.

Make, the Sir John Soane's Museum and the World Architecture Festival (WAF) have come together to create a prize for architectural drawing. The Prize recognises the continuing importance of hand drawing but also embraces creative use of digitally produced renderings.

Welcome to the third installment of The Long(ish) Read : an AD feature which uncovers texts written by notable essayists that resonate with contemporary architecture, interior architecture, urbanism or landscape design. In this extract from The Seven Lamps of Architecture, published in 1849 and considered to be John Ruskin's first complete book on architecture, his studies are distilled into seven moral principles. 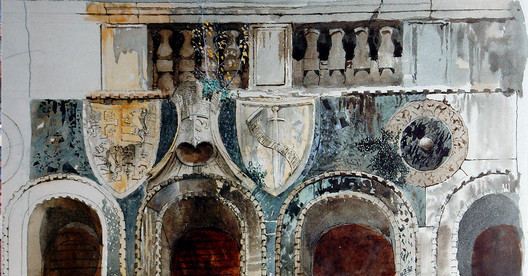