Text description provided by the architects. The Modern Art Museum of Medellin (MAMM) after 6 years of gestation has just opened to the public a major extension, more than doubling its size, by adding 7000 sq. meters to the existing 3000sq. it had in a refurbished steel factory.

MAMM
The Modern Art Museum of Medellin (MAMM) was founded in 1978 by a group of artists with the aim to arouse public interest in modern and contemporary art.

It was housed in the communal space (originally intended for a church) from the Carlos E. Restrepo social housing estate, and since its beginnings got regional relevance by events as the 1st Latin-American Congress of Non-objectional Art and Urban Art in 1981 or the Rabinovich Art Salon, the big promoter of young Colombian artists.

The urban plan considered the dismantling of all factories to allow for generic high-rise blocks in a rigid scheme, leaving only the oldest nave -‘Talleres de Robledo’- as the sole testimony of the industrial past. It was then successfully refurbished by the mythical Grupo Utopia as the new venue of the Modern Art Museum on the 30th anniversary of its founding.

INTERNATIONAL COMPETITION
In 2009, with the opening of its new home, MAMM organized an international design competition for its major expansion to house the requirements for achieving a world class museum infrastructure.

Fifteen prestigious international architectural studios were invited to team up with local Colombian colleagues for submitting their entries. In December 2009, the jury chaired by Spanish architect Federico Soriano and the public’s vote of those who visited the exhibited proposals awarded the first prize to the team of 51-1 from Peru and Ctrl G from Colombia.

LEARNING FROM LOS BARRIOS
51-1 + Ctrl G proposal, initiated from the application of Medellin’s own informal settlement patterns of progressive growth at its hillsides. Piled on top of each other, construction in the barrios steps up creating thousands of public interstices, where people exercise their urbanity in the most ingenious ways.

An open system connected by stairs. A neighborhood life made out of terraces, front yards, and stairways. The apparent informality on the play of volumes is inseminated with flexibility, common sense, and care, values so necessary for a public building.

YIN YANG
If with the celebrated urban renovation process of the hillsides of Medellin, the city ‘exported’ structure and equipment (metro cable, stairs, parks, libraries) then it is time for the vitality and flexibility of those barrios to be ‘imported’ to the rigidity of the nascent Ciudad del Rio.

If neighborhoods had a soul and were given a structure, new Ciudad del Rio has a structure but still lacked soul. That is the task of MAMM, as responsible of cultural and artistic strengthening of the new environment.

A VILLAGE, NOT A BUILDING
Instead of a building, a vertical village. This way, as in the informal barrios of stacked houses in the hillsides, where one’s roof is upstairs neighbor’s terrace, in the MAMM Expansion, the required programs are piled up making a cascade of public terraces connected by stairs.

A Colombian Piranesi. Inside, a promenade of art spaces. Outside, a vertical extension of the linear park of Ciudad del Rio up to the fifth floor: each one of these terraces can be seen as spatial reserves for the future growth of museum spaces. The incomplete museum that can extend either in an ephemeral or a definite way, according to its available resources.

This concept, based on a flexible model and not in a given shape proved very consistent when -after the competition was awarded- MAMM heavily amended its program based on budget, materiality (from brick to concrete) and requirement adjustments (as usually happens in the actual neighborhoods) so new demands were rearranged where it was most convenient, and the essence of the project remained unaltered.

ELEVEN BOXES AND A VOID
The museum is built in 5 levels. Besides new art galleries, it hosts laboratories, storage, offices, shops, cafés and a theatre. These areas need to be closed, hermetic and with special light and geometric conditions. They are like boxes.

Each one closed by prefabricated concrete panels which are pierced, cut, and carved to reveal different color, light, and textures. Eleven boxes -of different sizes and heights- rotate and pile on top of each other, in a careful and strategic placement. This in-between empty space, it’s the place where programs are mixed, relations multiplied between people and dialogues allowed with the landscape.

DOUBLE CIRCULATION
From the museography point of view, this organization allows for traditional, regular and closed exhibition spaces, as well as open and more flexible new ways for art display, and –most importantly- the simultaneous use of an internal museum circulation (ticket paid) integrating the box office with temporary galleries in Talleres de Robledo wing with new permanent galleries on the fourth level; and an external free and public route that elevates from the plaza into the theater and the laboratories of the third level up to the restaurant in level five, showing new vantage points for viewing the city and enjoying its pleasant year long spring weather in plentiful activity.

INTEGRATION
The expansion project is not conceived as an isolated building from the preexistent venue. The extension of the central nave into the center and inside the 51-1 + Ctrl G addition configures the new main entrance of the museum: a great void that connects old and new.

It is intended an emphatic aperture and integration towards surrounding public space, which is made clear in the continuity of the pavement, the allocation of great programmatic activity towards the exterior (shops, cafés, public toilets) and the absence of barriers. This is not only to extend the city’s public life inside the building but to –inversely- make possible that art and culture propagate to the exterior making them more public and accessible.

2X1
Each closed program from the museum complements with an open space, being a balcony, a plaza or a terrace. These spaces, beyond configuring as public spaces or open-air extensions of exhibitions, allow for users to pause and gaze the city.

Double use has also been considered for the theater since by investing in equipping only one stage, it can be arranged as a conventional (closed) theater or -by opening its eastern façade- to face the linear park attending a more massive audience. Many possibilities are enabled with this: a lecture inside the theater, the projection of an open-air movie or the staging of a concert having the plaza as a stage and the audience along the theater tribune.

Project Description
LEVEL 1
In the first level there are 3 boxes:
First is a box forming the entrances: towards the street and towards the plaza. It contains the underground parking access, the museum shop, public toilets, and the dressing room and podium for the theater.

Another box -aligned with the border- contains the art storage and the small café serving the plaza.
The third is a glazed box containing the box office and the access to Talleres de Robledo temporary galleries and the permanent galleries in the fourth level through the elevators.

LEVEL 2
There are 2 boxes in the second level. Both correspond to the museum offices which are covered by prefabricated concrete fret works that allow ‘seeing without been seen’. This is the only level in the project that doesn’t have a direct access from public stairways since it for the museum only private use.

LEVEL 3
On the third level there are 3 boxes:
A box contains the Sound Experiment Laboratory and 2 more laboratories for class and workshops given at the museum.

Another box -at the corner- hosts toilets and vertical circulation (2 public elevators, a service lift, and emergency stairs).
The third box is the Theater seating 256 people. It can also be configured as an open theater with the city as a stage by opening its east façade, or even using the same stage but facing contiguous plaza for massive events as concerts.

LEVEL 4
In fourth level there are 2 boxes:
Both contain the 3 exhibition galleries for the museum permanent collection, each one complemented by an open space allowing exterior exhibitions or simply pauses in the trajectory to gaze the city.

LEVEL 5
In fifth level there is just one box, which is defined by metallic fretworks containing the space for the restaurant and events of the museum, profiting from the two large adjacent terraces. 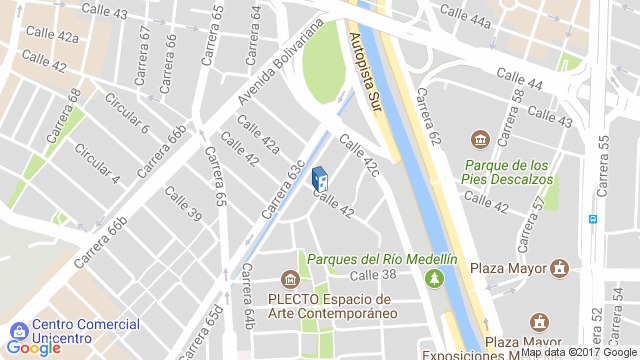