The competition asked teams to submit a vision for the tower that “not only creates a powerful, dynamic and bold new identity for the Tour Montparnasse but also addresses all the challenges involved in terms of user accessibility, comfort and energy performance.”

"We were considerably impressed by the high standard of all seven proposals submitted but we had to make a choice. After all, that's what competitions are all about!” explained the jury on their decision. “Both final proposals meet client requirements in terms of a bold urban statement, environmental performance and high-quality user accessibility."

"The City of Paris is delighted with the outstanding level of proposals competing in this final stage of the competition,” said Jean-Louis Missika, deputy mayor of Paris for urban planning, architecture, attractiveness, economic development and the Greater Paris (Grand Paris) initiatives. “Both candidates have demonstrated an expert grasp of the urban challenges posed by the Tour Montparnasse. Their proposals will enable the tower to adapt to the challenges of the 21st century and establish a new landmark in Paris' modern cityscape."

The €300 million project will be funded completely by the building’s co-owners, meaning it will come at no cost to taxpayers. The winning project will be announced in September. Construction is scheduled to begin in 2019, with completion targeted for 2023.

The Ensemble Immobilier Tour Maine-Montparnasse (EITMM) has selected 7 notable firms to continue to the second round in a competition for the renovation of Tour Montparnasse in the Montparnasse district of Paris, France. 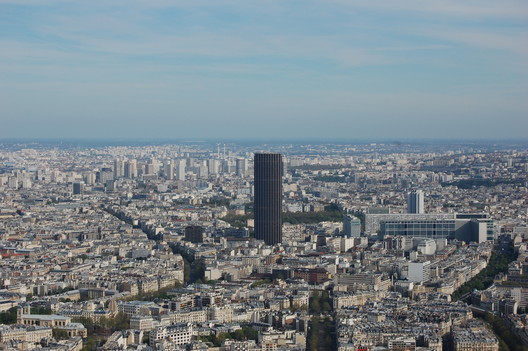