✕
Save
8 Annoying Things All Architects Do
Share
Or
Copy

Contrary to how Hollywood movies portray the quintessential architect—creative, sensitive, and virtually flawless—architects are a diverse bunch of fallible people. This stems from the fact that the study and practice of architecture are wrought with several “perils.” Architecture school is a beast, if not the profession at large, and it essentially reinvents the psyche of its students by simultaneously breaking them down and building them up—say hello to unresolved issues!

While this process produces bright intellectuals with a deep understanding of architecture’s place in society, it can also end up shaping architects into pretentious snobs. Young architects invariably graduate with a distinct outlook on life. Pair that with a largely thankless job and architects soon discover that they can only relate to other architects. Rare friends who bravely stand by an architect through thick and thin deserve a strong pat on the back because architects, despite their innumerable charms, exhibit several incredibly annoying traits. The following is a compilation of eight complaints that non-architect friends and partners have against their architect counterparts:

1. The Architect Thinks Everything is Architecture

Architects somehow find a way to connect everything to architecture. They truly believe that every problem our world faces today—from climate change to the refugee crisis—is a result of past architectural decisions and that architecture alone is the means to solve these problems. However, that is not the most annoying part; everyone’s entitled to their opinions. The thing that ruffles feathers is that architects will debate endlessly and won’t rest until everyone agrees with them.

2. The Architect Knows Everything

Five years or more of an interdisciplinary education—which involves endless juries—leads architects to think of themselves as God-like omniscient super-beings, developing unshakeable self-confidence. Hence, whether people are talking about string theory or the Kardashians, architects will make it a point to challenge their opinions with conviction.

3. What Does the Architect Mean to Say?

If there were an award for communicating the simplest of ideas in the most convoluted way possible, an architect would win hands down. Architects have, over time, mastered the skill of injecting fancy sounding words—think fenestration, pastiche, or juxtaposition—into regular conversation while employing labyrinthine sentence structures, much to the disgust of their friends and partners. Members of an architect’s innermost circle also know better than to ask her what words like space, concept, or architecture mean, unless they want to bore themselves to death.

4. The Architect Likes His Coffee with a Hint of Snobbery

Architects have, through their days at architecture school, established a unique emotional relationship with coffee. They invariably have strong preferences, either about the kind of beans used, the way the drink is brewed, or the mix, and they won’t shy away from declining coffee that isn’t exactly how they like theirs.

5. The Architect Can Always Do Better

Architects are trained to always strive for more; their jurors told them something was missing even when their designs were extraordinary. This manifests as obsessive perfectionism in everything that they set their minds to. Simple tasks such as picking out a New Year’s card for their parents or selecting a font for their résumé can take them hours. Architects are also overly critical of other people and can easily find fault in everything, from the way you use your toothbrush to something as universally acclaimed as Adele’s music.

6. The Architect Fan-Girls/Fan-Boys Over Famous Architects

The advent of social media platforms such as Instagram and Twitter has resulted in a slew of architects that have a fan following in the architecture world similar to that of movie stars. Architects, especially young ones, can be spotted in Bjarke Ingels get-ups at costume-parties quoting words from his speeches and saying things like, “Isn’t he the cutest!” Meanwhile, their non-architect friends who are dressed as Katniss Everdeen or Luke Skywalker are left bewildered as they speak through clenched teeth: “I know he’s your laptop screensaver but I have no idea who he is. And for the twentieth time, I don’t care!”

7. The Architect Loves Everything about the City

Going out with an architect in the city streets is an adventure in itself, but one sure to get on their friends’ nerves. Architects will stop dead in their tracks to stare at a sidewalk stone or the typography on a billboard. They’ll spend twenty minutes talking about a building and its significance in “modernist architecture” while their friends miss the last bus home. From time to time, architects will also have sudden movie-like bouts of inspiration at the local café that lead to doodling on coffee-stained paper napkins. Their friends, meanwhile, are left wondering if their only job is to order more napkins from the annoyed waitstaff.

Architects love to talk about how much sleep they’ve not gotten. A non-architect at a table of tired-of-work architects will find the conversation circling back to this topic every few minutes. It would seem that the sole yardstick for how architects measure success is by comparing how little they sleep. There are also the perpetual complaints about how little they earn for how much they work. Architects forget that their friends and partners know it all since they are the ones that have always had to pay for food and work their schedule around the architect. The friends don’t mind that the architect is broke or that she has no semblance of work-play balance in her life. It’s just that they would rather talk about the new Game of Thrones episode than listen to the architect whine like a baby.

Update: This article originally included illustrative comics by Ridhi Sood. At the time of publication, ArchDaily was not aware of their creative resemblance to comics by catanacomics. At the request of the author of catanacomics, we have removed the article's original illustrations and are currently working on some replacement artwork.

Update 2: The new images for this article were kindly provided by Andrea Vasquez. 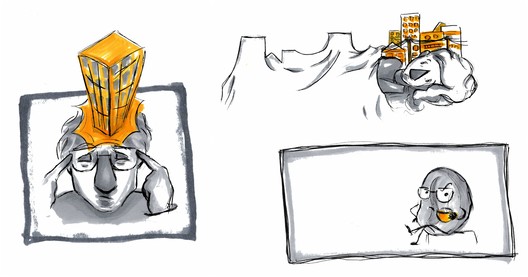