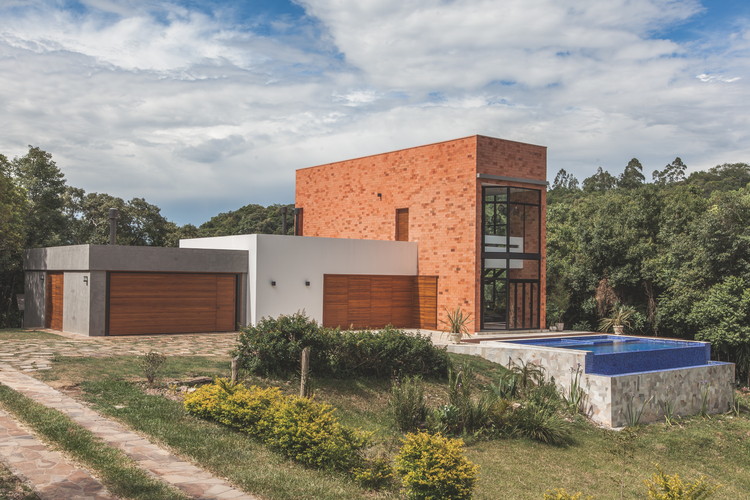 Text description provided by the architects. A small farm with a slope of approximately 20 meters. The landscape is defined by the preserved nature, a consequence of the few interventions in the surroundings of the Itaara City.

The most surprising thing for the project was the definition of the place of implantation: a plateau, which interrupts the slope. From the street, little is seen beyond the high walls, due to its location in the lower levels. Beyond the gate, it is a long way to the house, outlined by the topography. This scenario was the first conditioning.

The second would be the desire to hide in this environment (and not mimic). This evidence of architecture in relation to the landscape was justified by the references that the residents brought to the beginning of the process of materials, colors and patterns. And it was fundamental that the plurality of this collage be contemplated in the proposal.

It was a house designed with many reservations, without many certainties, with comings and goings. A process of co-creation and recognition of the expectations of those who, from the beginning, prioritized happiness. Other conditions such as solar orientation and prevailing winds were priorities for the climate.

The dimensions of the house were defined from the beginning. The limits established for the environments, diluted with the large openings, seeking the views of this nature. In the inner spaces, it was the nature that was in evidence.

About the distribution of environments, the separation between social and intimate areas do not appear well defined. From the outset, it was argued that lounges should be integrated and that this formality would not be necessary. It was important to understand the rooms (summer and winter), and the kitchen cupboard in small but articulate environments.

In this way, we worked the angles and the opening of the planes to achieve this permeability, without having developed the idea of a single (and broad) space. The recesses that arise from this configuration, define the idea of patio balcony.

The intimate rooms are set overlooking the valley and sheltered from the street. The control of the solar incidence in these faces is made through brises and balconies.

The study environment configures the circulation and extension of the couple's dormitory. Thre is also access to the fireplace terrace, this being designed to be a overlook for the surroundings of the property and the nature. 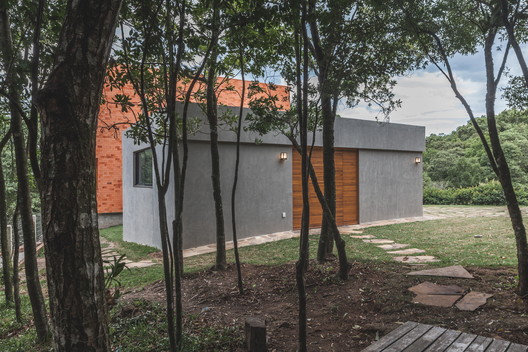